Big victory turns humble Roberts into a somebody 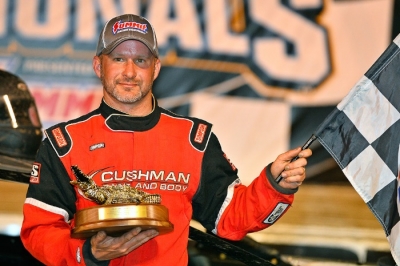 After the 36-year-old Toccoa, Ga., driver outran Hall of Famer Scott Bloomquist for his first Florida Speedweeks victory, there’s no secret that Roberts is a somebody who can hang with the sport’s best drivers.

“That guy can line up and race anybody in the country,” Green said while celebrating with Roberts after the race. “He’s a phenomenal guy to work with.”

Cushman was more excited than the low-key Roberts in victory lane, thrilled the No. 101 car won on the World of Outlaws tour for the first time.

“We were just tickled to death. I had to pinch myself,” Cushman said. "We don’t run with this caliber of cars … to do this good and be competitive.

“I’m real grateful and humbled talking about it. I’m really excited for Casey. He drove a good, wonderful race. … I’m just so proud of him, and hope we get some more, you know what I mean?”

While his supporters praised him, Roberts, as usual, was humble in thanking everyone that helped the two-time Ultimate Super Late Model Series and four-time Southern All Star East to the biggest victory of his career.

“I’m just a mechanic and family guy who likes to race,” Roberts said. “I don’t do it professionally or anything like these guys. That’s why I said in victory lane up there, one guy said 'Why did you call yourself a nobody?'

“I’m like, well, you know, if anybody in the stands, if you ask them who Casey Roberts is, they’re not going to know, maybe a handful of people, But if you ask 'em Scott Bloomquist or Billy Moyer or someone, Shane Clanton, they’ll all pretty much know that. That’s pretty much why I said it.

“I don’t like to take not credit at all. I like to give a lot of credit to where it belongs. It’s just a nice deal.”

He mentioned all the right sponsors, supporters and product help his team receives, but Roberts is especially grateful to car owners Jim and Ann Cushman, who first met him and believed in him when he was just a weekly driver at Toccoa Speedway.

“It’s good for me to win, but it’s good for me to win for them,” Roberts said. “It just means so much to me to get a win for them, a caliber of win like this. And to race with Scott, you know, Mr. Cushman, he’s just a big kid and I know he was up there just jumping up and down, him and his wife both, Miss Ann, it’s just unreal to come here and win and race with Scott like that. It’s a nice deal and we just had a great car. It was just in the Lord’s plan for us to win tonight.

“We’ve won $10,000 races before, but just to race with Scott, and all that, and just to be at Volusia down here at Speedweeks. That’s just definitely the top of my list, for sure, just the way we done it. We had to race for it.”

Boy, did he ever.

While Roberts started on the pole, he slipped to second behind WoO points leader Brady Smith at the outset before nosing his way into the lead on the 15th lap of 50 laps. But Bloomquist, Wednesday’s winner, began challenging Roberts amid a flurry of yellow flags, and began pulling away when he took the lead on lap 31.

But Green said Roberts, Capital’s first paying customer after Green launched the chassis with Clanton in 2010, stuck to the gameplan.

“One of our gameplans was, we knew everybody would be on the same tire,” Green said. “We talked before the race and decided the guy that had the most tire at the end of the race would win the race, probably.

“Our cars are really easy on tires, they don’t kill the tires all that bad, and we just said, 'If you don’t come off leading, if you come off running third, if you get passed for the lead later on, just be conservative with your tires. Keep the tires on the car all night long.' ”

So with Bloomquist’s lap times starting to slow in the final 10 laps, Roberts turned up the heat. He drew close on lap 42 before traffic gave Bloomquist some breathing room, but Roberts charged back into contention to set up his second-to-last-lap pass that gave him the lead once again. He took the checkers barely one length ahead of Bloomquist with third-fnishing Dale McDowell just behind.

“I knew Scott was really trying to shake Casey up, more so than trying to get the lead. I mean, he was really trying to get Casey to make a mistake, and he abused his tires pretty hard there for two or three laps to do that,” Green said. “Casey, he was just cool, calm and collected and stayed there and kept his tires on his car. Fortunately, it paid off for us, because at the end of the race, I think we had the best car and the best tires, and it just kind of came back to us. We actually got him to make some mistakes, and that’s hard to do.”

And for the third time in four nights at Volusia’s DIRTcar Nationals, a first-time winner was standing in victory lane.

“A lot of guys are winning that ain’t supposed to,” Roberts said. “I think it was just meant to be for us.”