McDowell blessed with variety of roles in racing 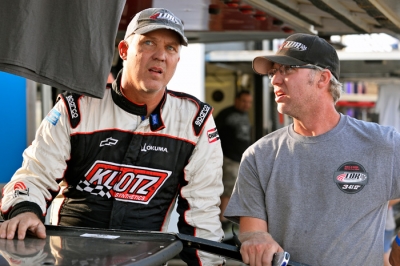 Indeed it was McDowell's first race behind the wheel, but he'd actually had one race under his belt in his new role at Boyd’s Speedway, the Ringgold, Ga., racetrack he purchased in December along with racing sponsor David Duplissey.

The blue-eyed driver whose close-cropped hair began graying quicker than most has seen too many veteran dirt racers reach the twilight of their driving careers without a dignified retirement in an industry where 401(k) plans aren’t an option. McDowell is grateful that, beginning with his connection with Childress nearly 10 years ago, his driving career has dovetailed into new racing avenues that should provide success and satisfaction long after he hangs up his helmet.

Not that McDowell will be forced out of his Team Dillon Racing Warrior Race  Car anytime soon. In racing select events the last few seasons, the 1999 Hav-A-Tampa Dirt Racing Series champion is still a solid contender. In Wednesday’s 40-lap feature at the 43rd annual DIRTcar Nationals presented by Summit Racing Equipment, McDowell made a 14th-to-second charge and fell just short of catching winner Scott Bloomquist.

“My plate’s full right now, but I’m having fun,” McDowell said afterwards near the Gator Pond in the Volusia pits. “With being able to show up and get in these things and run well and knock the rust off — the car was probably a little better than the driver tonight. If it’d had a better driver in it, it might have won. But it’s fun.”

McDowell has juggled driving school and development driver duties along with his racing — often side-by-side with brother Shane, the manager of Team Dillon’s dirt program and whom Dale never fails to praise. But co-owning a racetrack with Duplissey, whose National Boiler Service sponsors TDR, is a new challenge.

“I’m going through a learning process, because I got out of touch with A-hobby (divisions) and B-hobby and stuff that I used to race,” McDowell said, “and I got out of touch with those guys, so I was down in the pits (at the season opener) kind of learning who’s who and what the rules are. So I’m going to learn everything at the racetrack from cleaning the toilets to whatever’s happening in the press box to whatever’s happening in the pits.

“I feel like I’ve watched promoters across the country who have been racers, and I think they do an awesome job, so I want to carry on the tradition if I can do that, so I feel like learning every part of it will help me manage it.”

It’s a natural progression for McDowell, whose vision of climbing out of the driver’s seat crystallized during an 18-month stretch when Dale and Shane’s stepfather and mother died during McDowell's three-year driving stint with Clint Bowyer Racing.

“My mom … she really pushed us and taught us, both of us, a lot of valued lessons,” McDowell said. “Since she and my dad passed away, it’s made me look at things a little different, it’s made me slow down and look at the big picture. I’m 47, fixing to be 48. I love doing what we’re doing, but I know if I was running up and down the road in that truck, that I probably wouldn’t be exactly what these young guys are … they’re going to recover from those trips and do that stuff.”

Filling his other roles in racing is more rewarding at this point in his career.

“I’m just trying to pave the way for me to stay in racing. I love it. You know, I love doing the schools and teaching young guys that come in — I’ve got a bigger list of what not-to-do than what to-dos — but doing those type things, I really like it.

“And now the track. I’m excited about that. Being able to work on the racetrack, do some of the things that I saw promoters do around the country when we’re gone racing, and see how good that they’ve made things, and the racing surfaces, and to grow it, build it … I’m excited about part of that.

“But I am, I’m really fortunate … the involvement with Richard Childress in late ’06 when Shane and I came off the road and quit running a series, I knew that we needed a different direction. It was getting tough. It’s very expensive to run up and down the road and do this, so everything’s worked out well for us, and I’m very blessed.”

Blessed to be involved — and successful — in racing in so many ways.

“When we can have decent success racing and be able to get positive feedback from the racetrack, and be able to teach some of the young and up-and-coming guys at the school, and at the development deal at RCR, all that together is all part of racing … and that’s been my life.”

“When we can have decent success racing and be able to get positive feedback from the racetrack, and be able to teach some of the young and up-and-coming guys at the school, and at the development deal at RCR, all that together is all part of racing … and that’s been my life.”