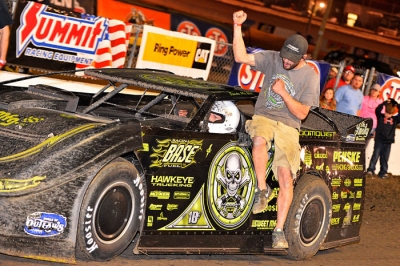 Making his first start in a new car he designed in a collaboration with noted parts manufacturer Randy Sweet, the 50-year-old superstar from Mooresburg, Tenn., mastered the sprawling half-mile oval to capture the 40-lapper that closed the UMP DIRTcar Late Model portion of the 43rd annual DIRTcar Nationals presented by Summit Racing Equipment. | Complete Speedweeks coverage

Bloomquist swept past fellow Hall of Famer Billy Moyer of Batesville, Ark., for the lead on lap 20 and never looked back in the caution-free event. He pocketed $10,000 for his ninth career DIRTcar Nationals victory.

“The racetrack was awesome tonight,” said Bloomquist, who began the six-night full-fender meet at VSP with finishes of sixth (Monday) and fifth (Tuesday). “It’s a little different when you just don’t sit out there and have everybody hold it on the floor all night. You gotta have a little bit of foot, a little bit of patience.”

Bloomquist showed plenty of those traits on his way to crossing the finish line 1.497 seconds ahead of Chickamauga, Ga.’s Dale McDowell, who made a strong advance from the 14th starting spot. McDowell reached second on lap 30 and briefly closed on Bloomquist before losing ground and settling for runner-up money.

Eric Wells of Hazard, Ky., who started fifth, climbed as high as second on lap 24 before being overtaken by McDowell six circuits later and placing third — his second podium finish in the week’s three DIRTcar Late Model events. Darrell Lanigan of Union, Ky., started and finished fourth and Moyer faded to fifth at the checkered flag after starting from the outside pole and leading laps 1-19.

In a race completed in a rapid 12 minutes, 35.182 seconds, Bloomquist started third and chased Moyer and polesitter Rick Eckert of York, Pa., through the early circuits. Bloomquist wrestled second from Eckert on lap 15 and quickly ran down Moyer.

With a burst off the inside of turn four, Bloomquist shot past Moyer to assume command for good as lap 20 was scored.

“We moved around and just tried to find where we could work well on the racetrack,” said Bloomquist, who won a DIRTcar Nationals feature for the fourth consecutive year. “I really felt great all over the racetrack, but finally we got to the middle of (turns) three and four. It looked like not too many guys could carry that much speed through the middle.

“(Moyer) looked like he was just kind of fading and we were coming to him,” he continued. “He might have went with a little different tire combination. But I knew all the guys up front had the same thing, so we just had the superior piece and I felt like we drove a pretty good race.”

Putting the new car in victory lane in its debut gave Bloomquist a definite confident boost.

“We finished this car while we were racing in Tampa (last week at East Bay Raceway Park),” said Bloomquist. “We’ve had a pretty rough two-week period, so to get the car finally done and get out here — this is the first laps on it this week — we really know we got something going on with this race car. I think there’s gonna be a lot of victories to come.”

McDowell, 47, appeared primed to stop Bloomquist’s march after surging past Lanigan and Wells to claim second place on lap 30. The veteran drew his Team Dillon Warrior within a half-second of Bloomquist before his bid stalled.

“I got to gaining a little bit there but just got to turning hard,” said McDowell, who was chasing his first DIRTcar Nationals victory since the 1999 finale. “I got kind of balanced out the last five, six laps, and got a little bit tight, and Scott was good rolling right through that middle. We’ll try to fix that problem and see if we can’t get up front the rest of the week.”

The DIRTcar Nationals continue Thursday with the first of three straights of competition featuring the World of Outlaws Late Model Series.

Vic Coffey won a tight race up front with Kenny Pettyjohn and Brady Smith for a victory in the second consy. Coffey stretched away midway through the race while Pettyjohn settled for second and Smith held off Don O'Neal for the third spot as the top four transferred. Tim Fuller finished a distant fifth in the caution-free event.

Jared Landers won the first consy over Bobby Pierce as they broke away from the field midway through the 10-lapper. Clint Smith was a distant third while Morgan Bagley picked his way through the field for the final transfer spot as other contenders fell back. Jack Sullivan was battling Chase Junghans for the final transfer spot on the third lap when he slipped high and out of contention.

Polesitter Darrell Lanigan overtook Tim McCreadie on the third lap and raced to victory in the final heat. McCreadie got the second spot while Shane Clanton and John Blankenship rounded out the top five. Outside front-row starter Brady Smith tried a three-wide move to grab the lead early, then got into turn two too hot on the second lap and nearly lost control. He saved it without hitting anything, but ended up sixth at the finish.

Polesitter Scott Bloomquist built nearly a straightaway lead early and cruised to victory in the third heat. Fourth-starting Brandon Sheppard got to second by the third lap, but he was too far back to catch Bloomquist on a track that's nearly a half-second slower than Tuesday night's fastest laps. Frank Heckenast Jr. and Steve Francis got the other two transfer spots, while Kenny Pettyjohn, Tuesday's feature winner, will head for a consolation race.

Jumping to the outside lane with two laps remaining, Billy Moyer roaring from fourth to third to win the second heat and earn a front-row starting spot for the main event. Marlar led the first seven laps from the inside lane but settled for second while Casey Roberts and Dale McDowell got the final transfer spots. Chad Hollenbeck also used the outside groove to finish fifth. Stacy Boles spun in turn four at the conclusion of the first lap to draw a caution.

Polesitter Rick Eckert won an early duel with fellow front-row starter Gregg Satterlee and pulled away for an eight-lap victory. He was a straightaway ahead of Eric Wells at the finish. Wells dropped Satterlee to third on the fifth lap while Satterlee and Brian Shirley got the final transfer spot. Jared Landers was fifth in his first start of the week while Bobby Pierce survived a mid-race slipup in turn three for sixth. The first start was called back when Satterlee jumped.

Moyer posted a time of 15.999 seconds at the D-shaped half-mile and will start fourth in a heat race after the four-car heat inversion. Heat race polesitters (unofficially): Rick Eckert of York, Pa.; Casey Roberts of Toccoa, Ga.; Scott Bloomquist of Mooresburg, Tenn.; and Darrell Lanigan of Union, Ky.

Two first-time winners captured Monday and Tuesday’s events with Ivedent Lloyd Jr. of Ocala, Fla., winning the opener and Kenny Pettyjohn of Millsboro, Del., victorious Tuesday. … The weather is beautiful for the third straight day with temperatures reaching the mid 80s. …  Drivers entered Wednesday who haven’t previously competed this week include Clint Smith, Tim Fuller, Jared Landers and Dale McDowell. … Monday’s winner Ivedent Lloyd Jr. will wait until Thursday before returning to action while fellow home-state drivers Chuck Julien of Apopka and Jason Fitzgerald of Middleburg rejoined the action Wednesday after taking Tuesday off. … This year is the first since 2004 that two first-time Volusia winners have won back-to-back. Greg Johnson of Bedford, Ind., and Jackie Boggs of Grayson, Ky., did it 10 years ago. … If Wednesday produces a third straight first-time winner, it will be the first time that’s happened at the DIRTcar Nationals since 1999 when Ray Tucker of Greensboro, N.C., Chub Frank of Bear Lake, Pa., and Rick Eckert of York, Pa., won in the week’s first three events. … Four provisionals will be added to Wednesday’s starting field, two based on DIRTcar Nationals points and two based on last year’s UMP DIRTcar weekly points. … The first of three World of Outlaws Late Model Series events begins Thursday as the national tour contests a trio of $10,000-to-win events.