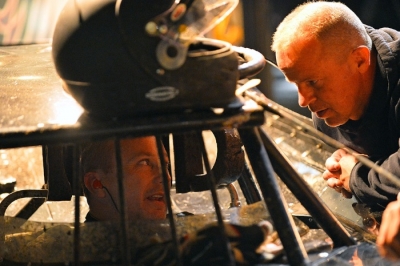 And while Owens was the feature’s first retiree after just 12 laps, all eyes were on the Owens-Lanigan pairing throughout the night while a flock of observers made Lanigan’s hauler the most popular spot in the pits.

“We talked to him over the winter there a little bit and told him we’d give him a chance to drive one of these down here, just to see how he liked it,” said the 43-year-old Lanigan, who launched his new chassis brand along with Ronnie Stuckey last fall. “Just to see if there’s any opportunity for us to get on board with him there where he could help us out some, and we could help him out some. We’ll just see how it plays out.”

The 42-year-old Owens, driving Lanigan’s familiar black car with the No. 20 pasted over the No. 29, quickly got up to speed, topping 38 entrants in time trials after just a few laps behind the wheel.

“We’d talked a little bit in the past and just discussed some things and decided we’d give it a try tonight and see how we liked it,” Owens said. “It was really good. I was impressed. We set quick time in our group and everything. I didn’t expect it to be that good, but it was.

“We got in a little tiff there in our heat race and kind of fell back a little bit, but at the drop of the green, the car was really, really good … we just decided to go ahead and get off the track (in the feature). I didn’t want to tear nobody’s stuff up. I really wanted to race and I felt like we could come up through there pretty good.”

Owens, arguably the sport’s most successful driver since climbing into his Mike Reece-owned Bloomquist Race Car in 2007, also dabbled with a Barry Wright Race Car last season, but he downplayed any imminent plans to make a chassis switch.

Lanigan wouldn’t mind seeing Owens become one of the headlining drivers for his fledgling chassis driven by Tony Jackson Jr., Kent Robinson, Justin Asplin and Brandon Overton, among others.

“It would definitely help our program out,” Lanigan said. “It’s definitely probably one of our plans to do this deal with him, to let him drive it tonight was definitely a plan for the future, so we’ll see what we can come up with here.”

While Lanigan and Owens share extensive success in national touring events recently, albeit on rival tours, they haven’t necessarily had a close public relationship in the pit areas around the country. But Lanigan sees some similarities.

“I’ve talked to him off and on. Actually we’re pretty much similar in ways,” Lanigan said with a gentle laugh, “like he’s a very quiet person, too, and he’s too himself at the track, and I’m about the same way. When we go to the track, we got there to win the race, and that’s all we go there for. Like I said, he’s a whole lot similar in that way. Like I said, I think it would work out good for both of us.”

Lanigan’s crew tended to the No. 20 most of the night, and Owens said he deliberately didn’t get too deep into the car’s suspension.

As it turned out, Owens was mostly pleased with the car’s performance. He plans to field his Bloomquist Race car later in the week at Volusia and said he didn’t have specific plans to drive Lanigan’s car again.

“It was a little surprising, but the car felt really good,” he said. “I mean, it turned in (to the corners) good, and I was more comfortable running the cushion than what I am a lot of times. I was really surprised how comfortable I was in the car to begin with.

"You know, with the traffic deal, it reacts a little different in traffic than what my car does. That took a little getting used to. Other than that, I was pleased.”