Bagley hoping to add to first top-five of season 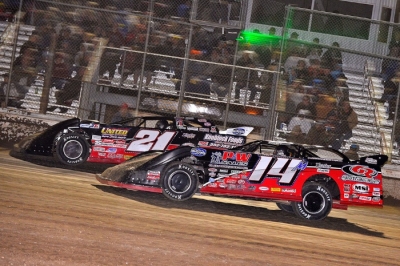 “We’re getting closer. I finally had something to work with there,” said the 27-year-old driver from Longview, Texas, who posted just his second career top-five finish on the World of Outlaws Late Model Series. “It’s a new team. They’ve been working real good together. New car, new team. We just came out here and we’ve been fine-tuning all week and getting a lot closer. I’m just glad to be competitive.”

But after two seasons with veteran crew chief Randall Edwards, who moved on to work with the WoO’s potent Rocket Chassis house car, Bagley has a restructured team as he tackles the World of Outlaws for the second straight season.

“These guys we’ve got here are great. They’ve been around racing and understand the cars,” Bagley said. “You know, Randall, he’s a great guy, and he’s been in this sport a long time and know what’s going on. With me not knowing much at all, he made a lot of the calls … pretty much I rode his back a lot of the way last year and let him make a lot of those decisions. We run good as a team and we run (poorly) as a team. We lived and learned together.

“Now it’s kind of the same deal. Nick was with us last year, and you know, me and Nick worked together, Matt and Jay work real good together. We’ve got us a good notebook here that we’re going to start making this year and just plugging along. I think we’ll be OK.”

With a top-five finish already under his belt, Bagley plans on adding to that total as the tour heads to Volusia Speedway Park later this week for the 43rd annual DIRTcar Nationals presented by Summit Racing Equipment and on into the rest of the season.

His primary goal? “Definitely just to improve on last year. We want to get more top-fives,” Bagley said. “If we get top-fives, that’ll put us in contention to win some races, and that’s what we want to do is be competitive night-in, and night-out, and have a chance to win races.”

Without Edwards, the 2012 P&W Sales Southern United Professional Racing champion knows he’ll have to step up his game.

“I learned a lot last year. Randall and Nick taught me a whole lot,” Bagley said. “That was my first year out on the road at a national level and second year in open(-competition) Late Models. They taught me a lot about my driving style, the cars and in general and everything. This year we’ve just definitely gotta keep good notes and make fine-tune adjustments. We’ve got a good idea that we know what fits us. Not to get too far out in left field — just stay consistent.

“These guys work hard and they do a really good job, and I’ve just gotta eliminate the mistakes in the drivers’ seat, because you can’t have mistakes when you race against these guys.”

In Sunday’s race won by Darrell Lanigan, Bagley’s solid run included a brief battle for the third spot with the weekend’s previous winners, Brandon Sheppard of New Berlin, Ill., and Brady Smith of Solon Springs, Wis. He was left wondering if a tire choice — he had a slightly harder tire on the left-rear corner than drivers finishing ahead of him — might’ve made a difference.

“It’s like, we must’ve been one tire off there,” Bagley said. “The top four had on one 20 and three 10s, and we had on two 20s and two 10s. Hey, we made that decision as a team and we just thought that’d be the best way to go, just talking to some of the guys we race with. Hats off to those guys, they made the right call, and I appreciate my team, Matt, Nick, Jay and all them, they make great decisions and give us the opportunity to be up in the mix of things tonight.”

Bagley improved throughout the weekend, finishing a lackluster 15th on Friday, moving up to 11th on Saturday and then clicking off a fifth-place fun Sunday.

“We’ve been making some fine adjustments and just feeling things out and plugging along there. So we’re getting closer.”