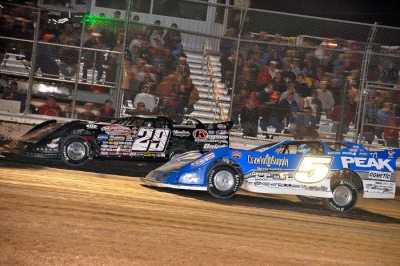 Finding the winning touch with his self-designed Club 29 car after top-five finishes in each of the first two events of the weekend, Lanigan passed Don O’Neal of Martinsville, Ind., for the lead on lap seven and controlled the remainder of the distance. The two-time WoO champion turned back a late challenge from O'Neal while racing through lapped traffic to pocket the race’s $12,650 top prize.

O’Neal settled for second place, about one second behind Lanigan at the checkered flag. The driver of NASCAR star Clint Bowyer’s Barry Wright car once again fell short of his elusive first-ever WoO triumph.

Friday winner Brady Smith of Solon Springs, Wis., finished close behind O’Neal in third place in his Rocket machine, sending him out the gates of the 3/8-mile oval with the WoO points lead. He scored a podium finish in all three events.

O’Neal’s Bowyer Racing teammate, Steve Francis of Ashland, Ky., placed fourth in his Barry Wright car after getting shuffled back to eighth on a lap-22 restart. Morgan Bagley of Longview, Texas, finished fifth in Wayman McMillan’s Rocket machine — just his second career top-five finish on the series — after battling past Saturday-night winner Brandon Sheppard of New Berlin, Ill., for the position on lap 48.

The 21-year-old Sheppard was in position to sweep a WoO program for the second consecutive night after setting fast time and winning a heat, but he settled for a sixth-place finish after starting eighth. He steered the Rocket Chassis house car as high as fourth midway through the A-Main but slipped backward in the closing circuits while unsuccessfully searching for traction on the outside of the track.

Lanigan, 43, also found the top side of the egg-shaped speedway difficult to grip late in the race. He tried using the outside line to overtake a pack of lapped cars with less than 10 laps remaining and it nearly cost him the race.

After racing virtually unchallenged for most of the distance, Lanigan suddenly found O’Neal on his back bumper on lap 53. With Lanigan’s pace hampered by two slower cars ahead of him, the door was open for O’Neal to duck to the inside and come within inches of grabbing the lead on lap 54.

But then Lanigan summarily dived to the inside in turn one, breaking O’Neal’s momentum and building just enough of an edge to carry him to his first WoO victory of 2014 and his fifth victory in 11 starts at BRP over the past five years.

“The lapped cars were tough,” said Lanigan, who sits atop the all-time WoO victories list. “We were definitely a lot faster than they was (lapped cars), but there just wasn’t no (outside) groove. I just lost too much ground up there so I had to get back to the bottom.”

O’Neal saw the golden opportunity to steal the race from Lanigan’s grasp, but his hopes were effectively snuffed out by Lanigan’s move to the inside. He had to be satisfied with matching his career-best WoO LMS finish.

“He got on the outside of that (lapped) traffic and the outside wasn’t the place to be,” O’Neal said of Lanigan. “Now, if he would’ve stayed out there just a little bit longer, we may have gotten him, but that’s part of racing.

“He just cut down real hard in front of me, but that’s part of it. I would’ve done the same thing if I was him. We made it exciting there at the end but just didn’t get the job done.”

One of the most accomplished veterans in Dirt Late Model racing, O’Neal remained winless in 31 career WoO starts over the past decade. He has 17 top-five and 25 top-10 finishes in his limited appearances on the tour.

Lanigan’s series record 54th career win was his first in World of Outlaws action since debuting the Club 29 chassis he partnered with noted crew chief Ronnie Stuckey to build and market. He needed a couple nights to get the machine tuned just right.

“It’s a little bit different from what we’ve been used to,” said Lanigan, who scored finishes of third and fifth in the first two legs of the Winter Nationals. “We’ve been close (in the previous events), but it needed a little bit more. We found some stuff tonight and it seemed to like it.”

Putting a WoO victory on his ledger so early in the season certainly gave Lanigan a boost.

Finishing in positions 7-10 was 17th-starter Mark Whitener of Middleburg, Fla., who enjoyed a career-best WoO LMS outing; Tim McCreadie of Watertown, N.Y., who quietly moved forward from the 13th starting spot; Shane Clanton of Zebulon, Ga., who used a provisional to start 23 rd after breaking a driveshaft in his car during heat action; and Jack Sullivan of Greenbrier, Ark., who rose as high as sixth before a worn right-front tire slowed his pace.

WoO competitors return to action with three consecutive nights of action (Feb. 20-22) during the 43rd DIRTcar Nationals presented by Summit Racing Equipment at Volusia Speedway Park in Barberville, Fla. The traditional race meet at the Volusia half-mile also includes three evenings of DIRTcar-sanctioned Late Model competition from Feb. 17-19 that will see many WoO regulars in action. DirtonDirt.com will offer live pay-per-view video coverage of each DIRTcar Nationals event. Click here for more broadcast information or follow this link to purchase a pay-per-view package.

Shane Clanton and Chub Frank will receive provisionals based on the 2013 World of Outlaws standings and start in the 23rd and 24th starting positions.

Low-running Raymond Merrill started on the pole and led every lap of the second consolation race. Eric Wells and Gregg Satterlee followed Merrill across the finish line to claim the final two transfer spots. The first two attempts to start the race were unsuccessful, Gregg Satterlee charged for jumping the first start and a multi-car pileup ensuing in turn two on the second attempt after Merrill got crossed up in front of the field. All cars were able to continue on a complete restart.

Mark Whitener paced the opening consolation race flag-to-flag to score an uncontested victory. Rick Eckert started and finished second while Clint Smith claimed the final transfer spot. Shane Clanton and Mike Marlar each got too high exiting turn four, tagged the wall and retired on back-to-back laps during the race's middle stages. Casey Roberts got crossed up on the race's initial start and spun atop turn two. Roberts went to the tail and rallied to finish fourth, but fell one spot short of transferring to the main event.

The program is under a brief intermission for track prep before the two World of Outlaws consolation races. Track co-owner Bubba "The Love Sponge" Clem is piloting one of several machines that are freshening the racing surface.

Don O'Neal dominated the final heat race, pulling away from the field at the drop of the green flag and leading every lap. Second-starting Morgan Bagley fell back as far as fourth in the race's opening laps, but rallied back to claim the second spot and will join O'Neal in the redraw. Bagley rebounded from a poor start by winning a side-by-side battle with Boom Briggs for third in the early laps and later took second from Tim Fuller on a lap-6 restart after Michael Lake spun to draw the heat race's lone caution. Fuller chased Bagley over the final laps, but settled for third, while Boom Briggs grabbed the final fourth and final transfer spot ahead of Gregg Satterlee.

Third-starting Steve Francis slipped under early leader Dan Stone down the backstretch on the fourth lap and went on unchallenged to claim the third heat. Stone held to finish in second, while polesitter Frank Heckenast Jr. - who was penalized a row for jumping the race's intial start - rounded out the podium. Scott Bloomquist secured the fourth and final transfer spot in the caution-free 10-lap affair. Raymond Merrill finished fifth and will start on the pole of a consolation race.

Polesitter Brady Smith inherited the lead from fellow front-row starter Shane Clanton on the first lap and paced the final six laps en route to victory. Clanton got the jump on Smith in the first turn and led the first four laps, but dropped a driveshaft while leading and retired. Ivedent Lloyd Jr. finished two car-lengths back of Smith in second and will also go to the redraw, while Chase Junghans won a racelong battle with Jack Sullivan for the final two transfer spots. Chub Frank slowed atop turn four on the fifth lap to draw the race's only other caution.

Brandon Sheppard shot to lead in the opening corner and powered away from the field to victory in the opening heat. Darrell Lanigan won an early three-wide battle with second-starting Tim McCreadie and Brandon Overton to earn the second spot and will join Sheppard in the feature redraw. Overton settled in to finish third while McCreadie fell back to the fourth and final transfer spot. The race's initial start was called back after Mark Whitener spun atop turns one and two. Whitener came from the tail to finish sixth and will run a consolation race.

Saturday's Bubba Army Winter Nationals winner Brandon Sheppard of New Berlin, Ill., topped all qualifiers for the third consecutive day with a 14.626-second lap and will start on the pole of the first heat. Brady Smith of Solon Springs, Wis., who won Friday's World of Outlaws opener at Ocala, was second fastest in Group A with a 14.785-second lap and earned the pole for the second heat.

Dan Stone (14.937 seconds) of Thompson, Pa., and Don O'Neal (14.941 seconds) of Martinsville, Ind., headed the Group B speed charts while making their first apperances of the weekend at the 3/8th-mile and will start on the pole of heats three and four.

Among drivers experiencing troubles in time trials were Brian Reese of Sharpsburg, Ga., Mike Marlar of Winfield, Tenn., and Jim Manka of Savannah, Ga. Reese slapped the wall on his first qualifying lap, while Marlar and Manka each spun in turns three and four. Scott Bloomquist of Mooresburg, Tenn., was penalized for arriving late to the lineup and only received one lap.

A healthy crowd has gathered as beautiful weather conditions prevail with sunny skies and temperatures in the 70s. … The drivers’ meeting was originally scheduled for 2:30 p.m. with hot laps to follow at 3 p.m, but the program has been pushed back an hour. … Sunday's $12,000-to-win program is the richest Late Model event on the 2014 Speedweeks slate. ... Brandon Sheppard of New Berlin, Ill., and Brady Smith of Solon Springs, Wis., split victories in Ocala's first two rounds and currently sit tied atop the World of Outlaws point standings. … Scott Bloomquist of Mooresburg, Tenn., Steve Francis of Ashland, Ky., Don O’Neal of Martinsville, Ind., Dan Stone of Thompson, Pa., and Gregg Satterlee of Indiana, Pa., are among drivers who have made the 110-mile journey north to Ocala after competing Monday-Saturday at East Bay Raceway Park in Gibsonton, Fla. … Bloomquist is entering his Sweet Bloomquist Race Car for the first time, part of his collaboration with steering specialist Randy Sweet. ... York, Pa., driver Rick Eckert became a grandfather last evening, with his daughter Courtney giving birth to a seven-pound, seven-ounce baby girl, Lona. ... Chub Frank of Bear Lake, Pa., has unloaded his backup car for this afternoon’s program. … Hometown driver Austin Kirkpatrick of Ocala, Fla, scratched for the evening after his team discovered engine problems following hot laps; his team hopes to make repairs and compete in Volusia's DIRTcar Nationals by the middle of the week. ... Following this weekend's events at Bubba Raceway Park, WoO competitors move to Volusia Speedway Park in Barberville, Fla., for three more events apart of the 43rd annual DIRTcar Nationals presented by Summit Racing Equipment. DirtonDirt.com will offer live pay-per-view video coverage of each DIRTcar Nationals event. Click here for more broadcast information or follow this link to purchase a pay-per-view package.