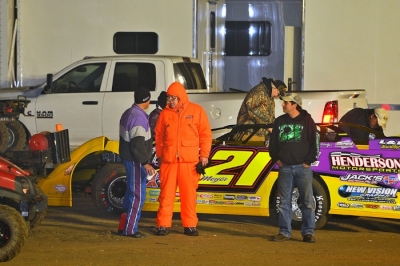 GIBSONTON, Fla. (Feb. 15) — Although Billy Moyer was fast qualifier for the nightcap of Saturday’s doubleheader, fans at East Bay Raceway Park’s 38th annual Winternationals missed a chance to see the Hall of Famer grab his third victory of the week when he elected to load up his car after being penalized by the Lucas Oil Late Model Dirt Series. | Complete Speedweeks coverage

Fast qualifiers normally start on the pole of Lucas Oil Series heat races, but because Moyer missed his scheduled qualifying spot after being required to lower his car’s deck height by series officials, he was assigned a third-row starting spot.

The 56-year-old Batesville, Ark., driver, whose 23 victories are the most in Winternationals history, didn’t want to risk damaging his Longhorn Chassis after victories on Tuesday and Friday nights.

“We’ve come here with a dominant car all week. Everybody knows that and I don’t have a mark on it,” Moyer said. “I could see bad things happening, just starting back there like that. Being pissed off myself a little bit, I just figure we’ve got a car we can take to Volusia (Speedway Park next week), and hopefully we can knock a couple (of victories) off there and we’ll just go on with it.”

His son Billy Moyer Jr., last year’s Rookie of the Year on the tour, and Steve Francis of Ashland, Ky., last year’s series runner-up, were among drivers receiving the same penalty under the same circumstances. The younger Moyer loaded up along with his father while Francis competed, finishing sixth in the main event.

While the penalties were levied for qualifying out of order, all three drivers said they were late to time trials because they had to repeat pre-qualifying technical inspection because their deck heights initially measured too high.

The Moyers were critical of the decision to crack down on deck heights on the final night of the week, with the elder Moyer suggesting that most inspectors frequently overlook minor discrepancies, requesting a lower deck upon the next inspection.

“It ain’t like it’s 2 inches,” the elder Moyer said after watching his son’s car get checked out. “We’re talking about an eighth of an inch.”

Francis accepted his penalty and agreed his deck height broke the rules, but wasn’t pleased with the enforcement method. Because his team was scraping mud after track-packing and hot laps, and because his car required a second trip to the inspection line, he was late for time trials.

“All they had to say at the drivers’ meeting was 'Guys, I know everybody’s decks been getting out of control. Be right when you come across (because) we’re going to check 'em tonight,' ” said Francis, who estimated that 70 percent of the cars had illegal deck heights before word spread of Saturday night’s inspections.

Moyer called the inspections a “sneak attack.” Several drivers said that deck heights hadn’t been specifically targeted through the first eight races of the season.

The younger Moyer was disappointed with the ruling despite his loyalty to the series as a full-time driver in 2013.

The elder Moyer said he wondered if "we all got treated equal,” adding that he didn’t believe the series ever inspected four-time champion Earl Pearson Jr.’s backup car after he wrecked his primary car.

Lewis dismissed such accusations as “asinine” and suggested Moyer said it because he was “upset with the situation.”

“That’s very childish for anybody to think that we would put ourselves in that situation that we would just tech randomly, tech some and not tech others,” Lewis said. “Again, why is the attention falling back on the series for doing their job?”

The one thing that everyone agreed on? Having Moyer compete would’ve been preferable to him sitting out the final night when Davey Johnson grabbed a $10,000 victory.

“You think I wanted to penalize Billy Moyer, a star of our sport? This guy is sitting here racking up wins, he’s having a tremendous week,” Lewis said.

“There’s a whole lot of fans wanting to watch him,” Billy Moyer Jr. said during the night’s consolation races. “There’s maybe a few (fans) up there for me, but there’s a helluva lot of fans for that guy right there, he’s the best in the business. And now he’s loading up.”

Said the elder Moyer: “I’ve been around a while; I think I’ve put some asses in the seats.” He believed he had a good chance to duplicate his three-victory week from 2008. Instead, he did something he rarely did during a career with 778 victories — loaded up without racing, a decision his sponsors supported, he said.

What made him do it?

“Probably because I’m older and smarter,” Moyer said, adding that he surely would’ve competed in the same situation when he was his son’s age. “I work hard on my car and I’ve got it meticulously tuned to how I want it, and bad things can happen here in an eyelash, as we all know, and I’m going to carry it on to the next place. I think I’ve got a winning piece.”