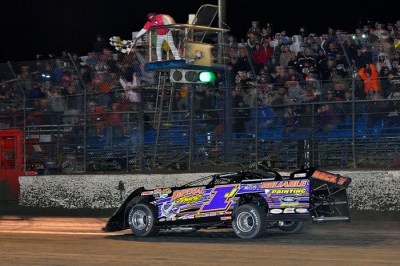 The sixth-starting Pearson of Jacksonville, Fla., running eighth on a lap-40 restart, nearly tracked down the winner in the closing laps but fell three lengths shy as the driver nicknamed The Juice collected $10,000 in the nightcap of a Saturday doubleheader.

“That was a long time ago. … but it feels the same,” Johnson said in victory lane after leading the final 48 laps of the 60-lap finale. “To win here at East Bay. I thank all the fans here. It was just awesome.”

Johnson overtook polesitter Jimmy Owens of Newport, Tenn., on a lap-12 restart and led the rest of the way for his first five-figure payday in more than nine years.

Scott Bloomquist of Mooresburg, Tenn., and Ray Cook of Brasstown, N.C., were running second through the race’s middle stages, but they slipped back in the frenetic finish to ninth and 10th during the week’s wildest race.

The 52-year-old Johnson, who captured 1993-’94 STARS titles during the prime of his career, has renewed his enthusiasm for the sport and added crew chief Austin Hargrove to the team in opening the season at Florida Speedweeks.

Johnson's familiar No. 1J was fast much of the week, but until Saturday night, he never cracked the top five with at car that suffered significant damage when he was caught up in a backstretch accident Friday night.

“(Hargrove) worked until about six this morning,” Johnson said. “He’s a little tired there. We were all tore up last night, but I’ll tell you what, he got her back in shape. That’s why he’s the crew chief.”

After starting outside the front row and slipping back to third early, Johnson’s key move came on a lap-11 restart when he blasted around Owens to take command after lining up alongside Bloomquist in a double-wide restart.

“We went a little soft on tires there and I was messing with Jimmy and Scott there for a little bit, and we were down low running that bottom,” Johnson said. “When Scott put me on the outside, I just committed to it and said 'Here we go.' ”

From that point on, Bloomquist, Cook, Carrier and others took turns chasing Johnson with most drivers sticking with East Bay’s low groove. But Pearson jumped to the high side on a lap-40 restart, going from eighth to fourth over a four-lap stretch and was up to third at the final yellow flag with 11 laps remaining.

“We was riding around the bottom there and I knew we had to try something, so I went up on that caution just to see if there was any moisture left on the top of the track, and luckily there was. I just got up there before everybody else,” Pearson said.

“I got by Scott there and I was running on Davey there, but I couldn’t ever get beside him like I needed to. He did one helluva job around the bottom there, you know and from where we was running with 10 or 12 laps to go, to get to second, we’re proud of that.”

While Johnson stuck with the low groove in turns three and four, over the race’s final stretch he edged higher in turn one to seek the same traction Pearson had found. His crew chief Hargrove said he never signaled Johnson where to go.

“Must’ve been my rear-view mirror,” Johnson joked in victory lane.

The fifth yellow appeared when Jason Hughes (lap 14) got into the backstretch wall and another when John Mollick (lap 18) slowed and his car flamed up in turn one. He was pulled from the car uninjured.

On lap 29, Chad Hollenbeck spun backwards into the infield at the top of the backstretch to draw a yellow, then a Randy Weaver flat tire slowed the action on lap 40. The final yellow appeared when Dennis Erb Jr. slowed on lap 49.

Fans didn’t get to see Billy Moyer of Batesville, Ark., the winningest Winternationals driver in history, take a shot at his third victory of the week. The Hall of Famer loaded up after setting fast time, protesting a series penalty that put him in the fifth starting spot in his heat race instead of on the pole.

Moyer and his son Billy Moyer Jr. were among drivers penalized for missing their spots in the qualifying order after series officials required them to lower their rear deck heights in pre-qualifying inspection. Both Moyers loaded up.

Notes: Johnson’s Rocket Chassis is powered by a Craiger Racing Engine and sponsored by Imperial Towing, Reliable Painting, Johnson Boat Brokers, Genesis Shocks and Hoosier Tire. … Johnson’s previous $10,000 victory came Nov. 6, 2004, at Allegany County Speedway in Cumberland, Md. … All 18 finishers of the 26 starters finished on the lead lap. … John Blankenship ran in the top five most of the first half of the race but pitted near the midway point. … Dennis Erb Jr. also ran in the top five early before fading. … Devin Moran slid into the infield on the 35th lap and retired.

Scott Bloomquist won an early duel with polesitter Eddie Carrier Jr. and raced to victory in the fourth heat. Carrier settled for second with John Mollick and Kevin Weaver getting the other transfer spots in the final heat. Chad Hollenbeck pulled to the infield at halfway. Billy Moyer Jr., penalized after time trials, scratched in apparent protest.

In a race where the fast qualifier went missing, Davey Johnson slid under polesitter Earl Pearson Jr. on the eighth lap to grab the victory. Pearson held off Johnson most of the way, but the winner's low groove paid off and left Pearson as the runner-up. Don O'Neal couldn't keep up in finishing third while Gregg Satterlee got the fourth and final transfer spot. Billy Moyer, the night's fast qualifier, scratched from the heat race. He and his son Billy Moyer Jr. reported to series officials they were turning in their transponders in protest of penalties assessed after time trials for them missing their qualifying spots.

John Blankenship dominated the second heat from outside the front row while polesitter Brian Shirley finished a distant second. Dennis Franklin outueled Devin Moran for the third spot as the top four transferred to the main event. Bob Geiger spun in turn three for a lap-three yellow.

Outside front-row starter Jimmy Owens got the early edge on polesitter Dennis Erb Jr. and won the first heat to grab the pole position for the main event. Erb fought off Ray Cook in a battle for second while Steve Francis for the fourth transfer spot after taking a spot from Bobby Pierce on the sixth lap. A lap-three caution appeared when Ricky Weiss spun out of a transfer spot exiting turn two.

Two-time winner Billy Moyer of Batesville, Ark., was fastest among 40 entrants in qualifying Saturday evening for the Lucas Oil Late Model Dirt Series finale of East Bay Raceway Park’s 38th annual Winternationals, but a penalty for missing his qualifying spot cost him the pole for the heat race.

The top four finishers from each of four 10-lap heat races will transfer to the main event along with three cars apiece from each of two 12-lap consolation races. The DirtonDirt.com Strawberry Dash and a non-qualifiers’ race are also on the program along with a 60-lap main event.

Billy Moyer, Steve Francis and Billy Moyer Jr. were among drivers limited to a single time-trial lap and had to qualify last in his group because his deck height was too high in pre-qualifying inspection. ... Francis and Moyer Jr. were also among drivers who failed to qualify in the correct order, meaning they couldn't start better than fifth in a heat race; that's why their times don't match their spots in the heat lineups. ... Bobby Pierce of Oakwood, Ill., won the twinbill opener, earning $7,000 for his first victory at East Bay and first on the Lucas Oil Series. … Saturday's hot laps were scheduled for 6 p.m. but extra time was required to get the track in racing condition. ... Chad White's car slid into the turn-one wall as hot laps began. … A dozen drivers have made all five features: Eddie Carrier Jr., Devin Moran, Brian Shirley, Billy Moyer Jr., Gregg Satterlee, Jared Landers, Dennis Erb Jr., Bobby Pierce, Jimmy Owens, Davey Johnson, Kenny Pettyjohn and Chad Hollenbeck. … Eldora Speedway founders Earl and Berneice Baltes are among guests of East Bay at the finale. ... The event is the second points event of the week and , th of the season. … Earl Pearson Jr. leads the series points by five over Steve Francis. … The night’s non-qualifiers’ race pays $500-to-win. ... The next Lucas Oil event is the March 22 Indiana Icebreaker at Brownstown (Ind.) Speedway.