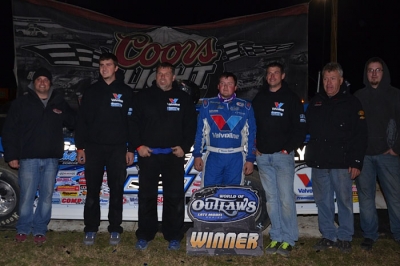 Lloyd, who started from the pole position and led six laps, swapped second place with Smith twice before settling for a career-best WoO finish of third. Tim Fuller of Watertown, N.Y., ran as high as second midway through the race but slipped to fourth at the finish and outside-polesitter Darrell Lanigan of Union, Ky., placed fifth after starting from the outside the front row.

The $10,050 triumph was Sheppard’s first of the young 2014 WoO season and the fourth of his career on the national tour. Two of his World of Outlaws checkered flags have come behind the wheel of Mark Richards’s familiar Valvoline-sponsored Rocket No. 1, which he is steering while reigning WoO LMS champion Josh Richards is sidelined by undisclosed medical issues.

Sheppard also earned his first-ever win during Georgia-Florida Speedweeks, which he has been attending annually since he was a high-school student.

“We’ve been trying a lot of years to get a win down here and had never been able to do it,” said Sheppard, who had made all his previous Speedweeks appearances in family-owned equipment. “We never really had any runs to write home about, but this year we’ve had a really good car the whole time we’ve been down here. This team is awesome and I felt like it was a matter of time before we’d get one.”

Sheppard’s great start in the first 50-lapper of the WoO campaign proved to be key to his success. He passed three cars on the opening lap to reach second place and then measured Lloyd’s Snow Brothers car for several circuits before grabbing the lead on lap seven with an inside move rounding turn four.

“Everything fell into place right,” said Sheppard. “We came up through there pretty quick. We had a ton of traction off of four. I feel like that’s where a lot of guys would lose time, but I could really get through there and get down on that bottom pretty good and drive off.”

Sheppard maintained a modest edge once in command, holding his rivals at arm’s length as he marched to a victory that gave him a rare sweep of a WoO program. He had some close calls in lapped traffic late in the distance but turned up the wick to power away from the 36-year-old Smith in the final circuits.

“I seen my guys telling me they were getting a little bit close to me when I was in lapped traffic,” said Sheppard, whose perfect night included fast-time honors in qualifying and a heat-race win. “I was kind of trying to save my tires a little bit there, but I knew we were pretty good on the top. I looked up and seen a couple laps to go and put it on the top and got something done.”

Smith, who hustled his Rocket machine forward from the eighth starting spot to reach second for the first time with a lap-26 restart pass of Fuller, happily accepted his runner-up finish.

“I’m not gonna complain about a second,” said Smith, who ended the night tied for the WoO points lead with Sheppard. “I was probably a little too conservative trying to save my tires, but we’ll take second.”

Lloyd, meanwhile, felt a prime opportunity to snatch a memorable first-ever WoO win on home turf might have slipped through his fingers.

“The track got a little rough and we had hard tires on,” said Lloyd, whose previous career-high WoO finish was a fourth in last year’s Winter Nationals opener at BRP. “I never would’ve thought four 10s (soft compound tires) would beat us here, but that’s how it goes. We were hoping for a little bit better, but it was a pretty good run. It’s an accomplishment to run third with these guys.”

Finishing in positions 6-10 was Tim McCreadie of Watertown, N.Y., who charged forward from the 19th starting spot after running a B-Main for the second consecutive night; Mike Marlar of Winfield, Tenn., who briefly cracked the top five; 17th-starter Rick Eckert of York, Pa.; Frankie Heckenast Jr. of Orland Park, Ill., who ran as high as sixth; and Casey Roberts of Toccoa, Ga.

Four caution flags slowed the event, including a notable lap-14 spin between turns one and two by Shane Clanton of Zebulon, Ga., who was bidding for fourth place when he lost control of his car. Other cautions flew for Eric Wells of Hazard, Ky., who spun in turns one and two on lap 10; Raymond Merrill of Sallisaw, Okla. (flat tire on lap 26); and Boom Briggs of Bear Lake, Pa. (slowed on lap 32).

The Bubba Army Dirt Late Model Winter Nationals conclude on Sunday (Feb. 16) with the inaugural 60-lap Super Sunday Showdown, which offers a $12,000 first-place prize. Gates are scheduled to open at noon with hot laps set to start at 4 p.m.

Tim McCreadie fought off early challenges from second-starting Austin Kirkpatrick before pulling away down the stretch to win the last-chance race by over a half straightaway. Kirkpatrick ran uncontested in second the entire way, while Brandon Overton won a mid-race, side-by-side battle with Boom Briggs for third. Briggs held the fourth and final transfer spot at the finish and will also move on to the feature. Scheduled polesitter Eric Wells scratched from the race and will receive a provisional starting spot for the feature.

Hometown driver Ivedent Lloyd Jr. redrew the pole position and will lead the 24-car feature field to the green flag, with Darrell Lanigan to his outside. Former Kennedy Motorsports teammates Tim Fuller and Shane Clanton will fire from the second row, while opening heat winner Brandon Sheppard drew the fifth starting spot and will roll alongside fellow Illinois driver Frank Heckenast Jr.

Second-starting Shane Clanton survived opening lap contact with polesitter Darrell Lanigan to score a victory in the final heat race. Lanigan slid up the track in the first corner on the race's initial start and made contact with Clanton, deflating the left-rear tire on his No. 29 and forcing a complete restart. Lanigan's crew hustled to change his tire, making it in time for him to tag the tail, where he wouldn't stay for long. Lanigan roared back from the tail to finish second and join Clanton in the redraw, taking advantage of a lap-4 restart by passing four cars in two laps after second-running Tim McCreadie spun alone in turn four while pressuring Clanton for the lead. Mike Marlar took third from Casey Roberts on the seventh lap, while John Garvin Jr. and Chub Frank nabbed the final transfer spots.

Ivedent Lloyd Jr. powered to the lead in turn one at the outset and went on for a flag-to-flag victory. Frank Heckenast Jr. took second in the caution-free heat, while Brady Smith finished third. Smith ran as high as second, but jumped the cushion in turn one during the race's middle stages and fell back to third. Seventh-starting Clint Smith steadily worked his way from seventh to finish fourth. Outside front-row starter Jack Sullivan jumped the cushion on the opening lap and fell back to fifth, where he would finish. Rick Eckert secured the final transfer spot.

Brandon Sheppard got the jump on fellow front-row starter Chase Junghans and led every lap of a caution-plauged opening heat race. Tim Fuller overtook Junghans, a fellow Capital Race Cars driver, for second on a lap-4 restart, while Morgan Bagley grabbed fourth from Eric Wells on the first lap and held it for the remainder of the 10-lap affair. Mark Whitener and Raymond Merrill claimed the final transfers spots in a heat race was slowed by three cautions. The race's initial start was called back after John Winge and Brian Reese tangled exiting turn four, David Gibson spun on his own in turn four on the second lap and Eric Wells spun atop turn two on the fourth lap and was clipped slightly by John Winge.

Topping the speed charts for the second straight night, Brandon Sheppard of New Berlin, Ill., laid down a lap of 13.955 seconds to earn the pole for the first heat race. Sheppard's time was less than two-tenths of a second off the track record of 13.771 seconds, which was set exactly one year ago today by Josh Richards of Shinnston, W.Va. Other heat race polesitters will be hometown driver Ivedent Lloyd Jr., of Ocala, Fla., and Darrell Lanigan of Union, Ky.

It’s a serene, sunny evening with temperatures currently in the low-60s and a light breeze. … The drivers’ meeting is set for 6:30 p.m. with hot laps to follow at 7 p.m. … Brady Smith of Solon Springs, Wis., turned back New Berlin, Ill., driver Brandon Sheppard’s late charge to win Friday’s World of Outlaws opener. … David Gibson Jr. of Charleston, W.Va., John Garvin Jr. of Sarver, Pa., Chuck Julien of Apopka, Fla, and Brian Reese of Sharpsburg, Ga., are new entrants this evening. ... Allen Murray of San Antonio, Texas, is the only driver of Friday’s 27 entrants who has not returned for this evening’s event; when turning in his transponder Friday night, World of Outlaws official Tyler Bachman asked Murray if he was done for the weekend, to which Murray jokingly replied, "I'm done forever." ... Wendell Wallace of Batesville, Ark., is serving as crew chief for teammates Jack Sullivan of Greenbrier, Ark., and Raymond Merrill of Sallisaw, Okla., during Speedweeks. ... Mike Marlar of Winfield, Tenn., unloaded his second Rocket Chassis for this evening's event; the Tennessean noted that he experienced no issues with his other car last evening and is simply trying to shake down a new car that was built over the winter. ... Bear Lake, Pa., driver Boom Briggs and Casey Roberts of Toccoa, Ga., have also unloaded new cars today. ... Following this weekend's events at Bubba Raceway Park, WoO competitors move to Volusia Speedway Park in Barberville, Fla., for three more events apart of the 43rd annual DIRTcar Nationals presented by Summit Racing Equipment. DirtonDirt.com will offer live pay-per-view video coverage of each DIRTcar Nationals event. Click here for more broadcast information or follow this link to purchase a pay-per-view package.