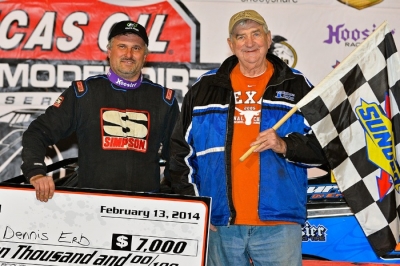 “Hell,” the 73-year-old Rayburn joked with a twinkle in his eye. “I might’ve pissed my pants if I’d have watched it.”

So maybe it was a good thing that Rayburn received news of the victory from a phone call with longtime girlfriend Teri Egner after Erb, a long-time Rayburn loyalist who returned to the chassis after three seasons with Bloomquist Race Cars, overtook Billy Moyer on the 38th of 45 laps for a $7,000 payday.

Phone calls from drag racing buddy Bob Glidden and other congratulatory messages blasted the phone of Rayburn, who found his way to victory lane for a hug with Erb’s crew chief Heather Lyne and to pose for photos with the victorious 41-year-old Carpentersville, Ill., driver.

That Erb notched a victory at East Bay, where he’d won four times before, wasn’t a surprise. That he drove a Rayburn Race Car, a chassis brand seemingly long past its heyday, was a surprise — to everyone except Rayburn, Erb and Lyne.

“I knew he was going to,” said Rayburn, who revolutionized Dirt Late Model chassis-building in the late 1970s. “It wasn’t doing any good to watch it. If I had needed to be out there signaling or changing tires or something, I definitely would’ve been there. But I done my part earlier, and it was time for them (to race). … They handle the car they want to, they do everything the way they want to do it.”

Count Erb among a handful of drivers enjoying a special relationship with Rayburn, who is respected and revered as one of the sport’s pioneers despite a reputation for stubbornness bordering on intractability.

“Oh, it’s hard to work with him,” Erb said with a laugh. But renewing their already established relationship is already paying dividends.

“A lot of people might not think, you know, that it was right decision … I’ve gotta do what’s right for me,” Erb said. “To be able to come out here and win for C.J. here, it’s a real good feeling, and hopefully this can just continue on here, and we can keep running good all year long.”

He added: “The way our relationship over the years, he’s been talking to me and wanting me to get back in his cars. I just figured it was the right thing for me to do, and just hopefully that this thing is going to work out, that we’re going to just be able to keep getting better with 'em.

Rayburn likes it when Erb is driving one of his cars, one of just three drivers piloting Rayburns at East Bay. (Justin Rattliff and Andy Bond, who is driving one of Rayburn’s personal cars, are the others). No driver has won a five-figure payday in a Rayburn since Erb did it in 2010, and the last crown jewel victory for the chassis stretches further back.

“The cars are good, and they always have been,” Rayburn said. “It’s the people. All the cars are the same anyway. Hell, they’re all ’84 Rayburns.”

Why haven’t Rayburns been winning major events in recent years that have gone to Rockets, MasterSbilts, Bloomquists and other chassis brands? “We don’t have the people in them,” said Rayburn, who insists there’s nothing particularly special about the car Erb drove to victory.

“The only difference is the girl that works on it and the guy that drives it,” he said. “Like I say, cars don’t win races. People do.”

And Erb and Lyne are the kind of people Rayburn is glad to work with.

Rayburns have a history of success on East Bay’s hooked-up racing surface, but Erb is convinced he’ll have a productive season no matter where he unloads.

“I know we can,” he said. “I think we’re going to do real well with this. We’re going to keep working, keep plugging away at it. It’s going to take some races to learn some things, but we’re going to give everything we’ve got here to make it work.”

Speaking of making it work, did Rayburn ever get that TV working in his hauler? Don’t ever doubt him.

“I got me a hacksaw … it’s working,” Rayburn said.