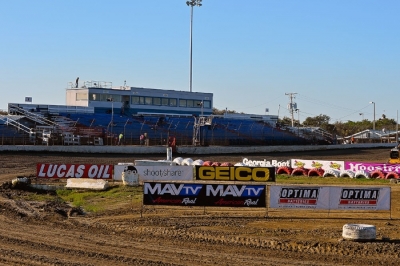 While series stars like three-time champion Jimmy Owens, Tuesday’s runner-up Steve Francis and two-time champion Scott Bloomquist might act nonchalant, “they can say they’re not pumped up, but I bet they’re pretty excited,” said Stapleton, who will be among 40 or so entrants for the $7,000-to-win event.

The two-hour program by Lucas Oil Studio Productions goes live at 9:30 p.m. EST tonight on MavTV with Dave Despain serving as the host. Ken Stout will call the play-by-play action while Rob Klepper will provide color commentary and Dave Argabright will be among the pit reporters.

Lucas Oil Series officials plan to have hot laps, time trials and heat races complete before the TV coverage begins. Shortly after 9:30 p.m., the first of two consolation races will appear on the telecast followed by the 35-lap feature event before the show ends at 11:30.

There’s a bit more of a buzz in the pits with some extra lighting and some teams putting an extra spit-shine on their cars for the night’s action, the third of six events during Lucas Oil’s portion of the third-mile oval’s Winternationals.

“I think it’s really good for our sport were able to get on TV,” said Jeff Gullett, crew chief for driver Justin Rattliff of Campbellsville, Ky. “I hope it all works out.”

While there have been numerous live pay-per-view events on the Internet, and frequently tape-delayed programs on a variety of cable and broadcast channels, live television is a rarity for Dirt Late Models. The division was featured in 1987 on ESPN’s Thursday Night Thunder from Santa Fe Speedway in Hinsdale, Ill., with Billy Moyer of Batesville, Ark. — Tuesday’s winner at East Bay — winning a USAC event.

In recent years, some live coverage of the Late Model action has been part of the World Finals at the Dirt Track at Charlotte (N.C.) Motor Speedway, but as Gullett pointed out, World of Outlaws STP Sprint Cars got more attention, treating the Late Models as a support division.

Lucas Oil announcer James Essex is excited about the show and said he’s had a few people from back home in Indiana tell them they’ve called their cable or satellite provider to make sure they have the fledging MavTV channel added to their package so they can watch.

Long-time Billy Moyer crew chief Steve Norris missed the show at Santa Fe nearly 30 years ago — he borrowed a VCR tape to watch it years later — but he’s glad to see the TV lights on at East Bay.

While Stapleton’s team cleaned up his No. 32 Barry Wright Race Car — “We’ve gotta make it clean and pretty,” he said — he admitted he feels a little extra pressure knowing the cameras will be rolling live.

“I’m a nervous damn wreck,” he said with a smile. “You make a mistake out there, and everybody back home will see how dumb I am.”

Dennis “Rambo” Franklin of Gaffney, S.C., said he wasn’t worried about live TV. He’s only worried about getting faster by returning to a trusty car from last season instead of the new car he’s struggled with so far at Speedweeks.

“I just treat it like another race — I just want to win,” said Franklin, adding that even if friends back home wanted to watch, some might not be able to because they’ve lost power from the ice and snow and blanketed the Southeast this week.

Stapleton said he hopes he qualifies for the feature through his heat race. Otherwise, he might have to pull out all the stops and do something crazy in the consolation to make the race. But that’s OK, he joked. “All publicity is good publicity,” he said.

And a nice dose publicity is what Dirt Late Model racing will get from the live production, he added.

“The more watchers we have, the more likely we are to have another one,” Stapleton said, adding that Super Late Model racing needs help to stay popular at weekly tracks. “We’ve gotta attract more fans. What more promotion can you get than (a live TV race) right here?”

One lucky team will be in victory lane on live television Thursday night. If Moyer wins, Norris could get a chance for some TV time that he missed in ’87. Does he have anything special planned?

“Let’s get there first,” Norris said, always wary of making any predictions. “We’ve just gotta start out with hot laps and see what happens."