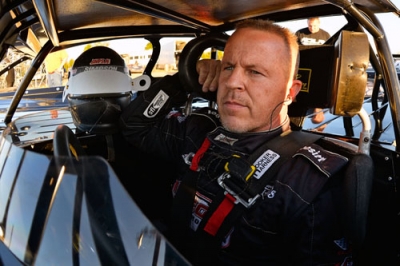 Some observers see the battle for the 2014 World of Outlaws Late Model Series points title as a wide-open affair with defending champion Josh Richards effectively eliminated from contention by undisclosed medical issues that will keep him sidelined for at least the season’s first six events.

The Dirt Late Model press, however, views the national tour’s ’14 campaign as being all about Darrell Lanigan.

Lanigan, 43, of Union, Ky., emerged as the overwhelming favorite to capture the circuit’s 2014 points crown in the seventh annual WoO preseason media poll, topping the voting for the second consecutive year in emphatic fashion.

A two-time WoO champ coming off a runner-up finish in the 2013 points standings, Lanigan will begin his quest for a record-tying third career points crown this weekend during the Bubba Army Dirt Winter Nationals at Bubba Raceway Park in Ocala, Fla. The season-opening stretch of World of Outlaws racing in the Sunshine State also includes events on Feb. 20-22 as part of the 43rd DIRTcar Nationals presented by Summit Racing Equipment at Volusia Speedway Park in Barberville, Fla.

Three dozen writers, photographers and broadcasters who cover the WoO participated in the poll, which asked the press members to predict the top-five finishers in the tour’s 2014 points standings. Points were distributed to each driver named on the ballots using a 5-4-3-2-1 system.

Lanigan absolutely dominated the voting, rolling up 166 points to easily outdistance Tim McCreadie’s 119-point total. The veteran from the Bluegrass State had his name appear on all 36 ballots, earning a poll-best 27 first-place, five second-place and four third-place votes.

In addition, 28 media members believe Lanigan will lead the WoO victories this season and he was voted the favorite to win all three of the circuit’s richest events: the Firecracker 100 on June 26-28 at Lernerville Speedway in Sarver, Pa. ($30,000 to win); the Prairie Dirt Classic on July 25-26 at Fairbury (Ill.) American Legion Speedway ($25,000); and the USA Nationals on Aug. 1-2 at Cedar Lake Speedway in New Richmond, Wis. ($50,000).

The support for Lanigan is clear evidence that the media has little doubt in his ability to seamlessly transition from the Rocket Chassis machines he has campaigned so successfully to his own chassis program. This season Lanigan is driving — and selling — Club 29 cars that he is designing and building in a partnership with noted dirt Late Model crew chief Ronnie Stuckey.

With his Cornett-powered mounts wrenched for the third year in a row by crew chief Jason Jameson and mechanic Adam Logan — and with veteran crewman Richie Davis coming aboard to add even more depth to the team — Lanigan appears primed for another WoO title run. The 2008 and 2012 champion has won more features than any other driver over the past two seasons — a total of 27, including a single-season record 15 in ’12 — and sits atop the 10-year-old tour’s alltime win list with 53 career triumphs.

McCreadie, 39, of Watertown, N.Y., found renewed backing from the media, rising from a fifth-place finish in the 2013 poll (the position he would go on to finish in the points standings) to a solid second-place spot in this year’s voting. The 2006 series champion, who will drive Rocket Chassis cars this season for the first time in three years, received five first-place nods — the second-most behind Lanigan — along with 12 second-place and nine third-place votes and joined Lanigan as the only other driver named on all 36 ballots.

Rick Eckert of York, Pa., was the only other driver to crack the century mark in the poll, finishing third with 102 points. A 48-year-old WoO stalwart who won the 2011 title, he appeared on 33 ballots, receiving two first-place, 12 second-place and seven third-place votes.

Shane Clanton, 38, of Zebulon, Ga., finished a close fourth in the poll, accumulating 97 points on the strength of two first-place, seven second-place and 13 third-place votes. He enjoyed a career-best WoO season in 2013 driving for Kennedy Motorsports (four wins, third place in the point standings) but left the team in December in order to spend ’14 steering Capital Race Cars fielded by his father-in-law, veteran western Pennsylvania racer Ron Davies.

The surprise fifth-place finisher in the poll was reigning DIRTcar Summernationals and UMP weekly champion Brandon Sheppard of New Berlin, Ill., who appeared on seven ballots (one second-place, one third-place, three fourth-place and two fifth-place votes) to tally 15 points despite uncertainty about whether he will even run the entire WoO schedule. Officially, the 21-year-old is driving the Rocket Chassis house car only until Richards is cleared by doctors to return to the seat, but team owner Mark Richards intimated that Sheppard could remain a WoO regular even after Josh comes back if his performance warrants making a two-car effort.

After winning the 2013 WoO Rookie of the Year award and finishing sixth in the points standings, Eric Wells of Hazard, Ky., turned enough heads among the media types to finish sixth in the poll. The 25-year-old appeared on 11 ballots, tallying one fourth-place and 10 fifth-place votes for 12 points.

Richards, 25, of Shinnston, W.Va., finished seventh in the poll, appearing on the ballots of seven press members who see him returning from his health woes early enough in the season to challenge for a top-five spot in the points standings. He received one third-place, two fourth-place and four fifth-place votes.

Under WoO rules, Richards will receive 60 medical hardship points for each race his misses, which will help keep him in contention for the top five if he’s able to quickly climb back into the cockpit.

As part of the poll, media members were also asked to predict who will win the most WoO A-Mains in 2014 as well as the victors of three major events at Lernerville Speedway, Fairbury American Legion Speedway and Cedar Lake Speedway.

Lanigan ran away with the voting in the top-winner category, earning 28 votes to four for McCreadie, three for Richards and one for Sheppard.

Media members predicted that the season’s most prolific winner will lead the tour with as many as 16 victories and as few as five.

In the Prairie Dirt Classic category, Lanigan’s nine selections narrowly beat out Sheppard, who received eight votes. Lanigan experienced one of his worst outings of the 2013 season in last year’s PDC, finishing two laps down in 19th place.