By Andy Savary and Todd Turner 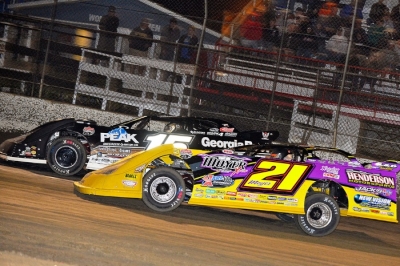 Moyer is far too modest, and with apologies to Ryan Delph, might need a new publicist. | Complete Speedweeks coverage

Stalking race-long leader Steve Francis late in the 25-lap Lucas Oil Late Model Dirt Series, the fourth-starting Moyer grabbed the lead on lap 22, then won a three-lap shootout to the checkers for a $5,000 payday in the second round of the 38th Winternationals.

The 56-year-old from Batesville, Ark., notched his 777th career victory overall and his 19th career Lucas Oil Series victory in an event three years to the day since his previous checkered flag at East Bay.

“It’s really an elbows-up place and I don’t know if it’s always been my style, but for just some reason, we’ve run decent here,” Moyer said. “So we’re happy for sure.”

Francis, the Ashland, Ky., driver who owns 10 Winternationals victories, settled for the second spot while polesitter Brandon Sheppard of New Berlin, Ill., was third as a substitute for an ailing Josh Richards in the Rocket Chassis house car.

Monday night winner Eddie Carrier Jr. of Salt Rock, W.Va. — who had a side-by-side duel with Sheppard at the same time Francis and Moyer battled wheel-to-wheel ahead of them late in the race — was fourth and third-starting Don O’Neal of Martinsville, Ind., a 15-time East Bay winner, rounded out the top five in a race where the top three winningest Winternationals drivers started among the first two rows.

Moyer took the second spot from Sheppard on the 10th lap and took up his chase of Francis, slowing reeling him in during the second half of the race as both drivers survived bouts with rough patches that sometimes sent their cars briefly airborne.

“He was running real good,” Moyer said of Francis. “Maybe it’s a little bit of a benefit to be behind at times to try to figure different things out.”

Moyer had some things to figure out after he ran as high as second in Monday’s opening feature, but faded to seventh at the finish.

“We had a good hot rod all night. Last night, we missed it, and it really made me mad, so I just tried to stay on top of the game more tonight. I just can’t say enough about these guys helping me, and that engine under the hood,” Moyer said with a laugh. “It’s a little hard on things when it’s off the ground sometimes there. I just hope she hangs together the rest of the week.”

Francis, making his first start of the week, knew he’d have to set a quick pace to outrun his pursuers.

“Between (Moyer) and O’Neal, that’s probably the two you don’t want right behind you here,” Francis said. “We didn’t run last night, and we just left it a little bit too loose tonight. I kinda knew I was a sitting duck there and hoping the race would get over.”

Bouncing around a bit didn’t bother Francis, who hopes to figure things out with his Clint Bowyer Racing Barry Wright Race Car in the Lucas Oil Series action that continues nightly through Saturday.

“That gives East Bay a little character. If this place is perfectly smooth, it kind of gets the condition it gets last night. A bump or two don’t hurt this place,” Francis said. “We’ve gotta do a little work to it and maybe come back and have something for Billy tomorrow night.”

The feature was slowed by five cautions, the most serious for a turn-two scramble that involved Jared Landers, John Mollick, Jimmy Owens, Tim McCreadie, Brian Shirley and Davey Johnson.

Other yellows appeared for a slowing Bobby Pierce on the second lap, a spinning Chad Hollenbeck on lap five, Devin Moran’s lap-15 spin and a lap-22 caution for Gregg Satterlee hitting the wall exiting turn two, which dropped just after Moyer’s winning pass.

Winternationals action continues Wednesday with a $7,000-to-win program. The series announced it will start an hour later than scheduled with hot laps at 7 p.m.

Notes: The winning Moyer Xtreme by Longhorn is powered by a Clements Automotive Engine and sponsored by Banner Valley Hauling, Crop Production Services, Henderson Motorsports, Watters Autoland, Carquest Auto Parts and Sunoco. … The checkered flag fell at 9:03 p.m. … Brandon Sheppard notched his second straight third-place finish. … Jason Riggs of Harrisburg, Ill., rallied from 21st to 11th. … Seventeen of 26 starters finished on the lead lap. … Dan Stone start on the tail after going to a backup car; he had engine problems in his primary entry.

Brandon Sheppard starts on the pole of the 25-lap feature and is seeking is first career East Bay victory; Steve Francis starts alongside and is gunning for his 11th career win at the Clay by the Bay. ... Dan Stone switched to a backup car following heat race action and will forfeit his 12th starting spot to tag the tail. ... Billy Moyer Jr. received the fast-time provisional and will start 25th, alongside DirtonDirt.com Strawberry dash winner Devin Moran.

High-running Gregg Satterlee won an early side-by-side battle with low-running Kevin Weaver to capture the final consolation race. Satterlee pulled away slightly over the second half of the race, while Weaver settled second. Fourth-starting Davey Johnson took third from fellow second-row starter Ricky Weiss at the outset and held it for the remainder of the 12-lap race. Bobby Pierce finished in the fourth and final transfer spot in a race plagued by only one caution, when Bob Geiger tagged the wall and spun in between turns three and four on the fourth lap.

Second-starting Jason Hughes bested polesitter Tim McCreadie for a 12-lap victory. Jason Riggs started and finished third will Booper Bare steadily worked his way from seventh to claim the final transfer spot. Justin Ratliff slowed on the fifth lap to bring out the race's only caution.

Fourth heat
Billy Moyer won an early side-by-side battle with fellow front-row starter Jared Landers to pick up the victory in the final heat race. Moyer pulled away from the field over the second half of the race, while Landers held off fourth-starting Dan Stone for second. Kenny Pettyjohn crossed the finish line fourth and will also transfer to the main event. Chad Stapleton spun alone in turn four and drew the race's only caution.

First heat
Brandon Sheppard got the jump on Eddie Carrier Jr. at the outset and held off repeated challenges from the Winternationals opening night winner to win claim the first heat race. Scott Bloomquist and Brian Shirley followed Sheppard and Carrier across the finish line to claim the final two transfer spots. Adam Bowman spun in turn four on the sixth lap to bring out the race’s only caution. Ray Cook scratched from the heat after losing a motor in qualifying.

Just one day after Salt Rock, W.Va., driver Eddie Carrier Jr. lowered the track record and became the first driver under the 14-second mark, fellow West Virginia driver John Blankenship of Williamson, lowered it once again, blazing to a 13.854-second lap and besting second-group qualifiers. Though he lost the track record, Carrier was plenty fast once again, breaking the 14-second barrier again and notching a 13.931-second lap to top the first-group charts.

Blankenship and Carrier will each start from the pole from a 10-lap heat race, along with John Mollick of Toronto, Ohio, and Billy Moyer of Batesville, Ark., who became the third driver ever to qualify under the 14-second mark with a 13.943-second lap.

John Blankenship of Williamson, W.Va, Scott Bloomquist of Mooresburg, Tenn., Steve Francis of Ashland, Ky., Tim McCreadie of Watertown, N.Y., Don O’Neal of Martinsville, Ind., and Randy Weaver of Crossville, Tenn., are making their first competitive laps of the week at East Bay. … Monday entrants Bob Gardner of Creve Couer, Ill., and Mike Stadel of Rapid City, S.D., have loaded up and retired for the week. ... Vic Coffey of Caledonia, N.Y., and Bobby Pierce of Oakwood, Ill., each experienced engine troubles Monday and swapped powerplants prior to Tuesday’s action. ... Chad White of Coloma, Mich., broke a motor before even hitting the track Monday. The team dropped a Vic Hill powerplant in Tuesday and should be in action Wednesday. … Dan Stone only had a few competitive laps Monday after a flat tire in the pits forced him to miss his heat race, then a chunk of mud hit his wheel and forced him into the frontstretch fence on the second lap of his consolation race. “The racing gods weren’t with me last night,” he said. … John Mollick of Toronto, Ohio, spectated at East Bay for a few years and decided he’d make his sole racing journey to Florida for 2014. “This is a one-shot deal,” said Mollick, whose goal is to make every feature. He was an early dropout in Monday’s main. … Lucas Oil Series marketing director Wayne Castleberry, dazed and bruised by a rock that struck him outside turn two during Monday’s first consolation, is patched up and no worse for wear (he made it back for victory lane Monday night). But he’s taking a little ribbing in the pits for holding up Monday’s program. “How’s it going bruiser?” driver John Blankenship asked him with a friendly pat on the back. ... Eric Jacobsen of Santa Cruz, Calif., scratched for the evening after sustaining left-side damage in a hot laps incident. ... Ray Cook of Brasstown, N.C., will likely be sidelined for the rest of the evening after his MasterSbilt house car team found shavings in the Oberg filter.