With Richards out, Rocket team soldiers on 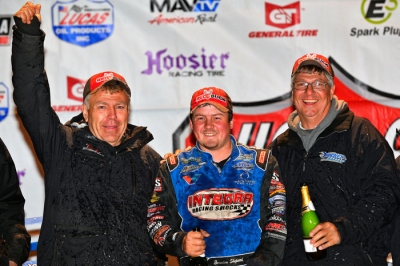 As soon as it became clear that medical issues would force Josh Richards to miss at least the start of the 2014 World of Outlaws Late Model Series campaign, his father and car owner, Mark, understandably directed his thoughts to his son’s health rather than racing.

“The first reaction was that we just shut down (the race team) and wait for him (to come back),” said Mark Richards, who fields the familiar Rocket Chassis house car that his superstar son steered to a third career WoO championship last year. “But Josh didn’t want that.” | Complete Speedweeks coverage

Indeed, the younger Richards made it clear he would be disappointed to see his dad’s powerhouse Dirt Late Model operation sit idle while he undergoes tests to determine what is ailing him. As a result, Mark Richards has called back fast-rising Midwesterner Brandon Sheppard of New Berlin, Ill., to take Josh’s place behind the wheel of the iconic blue No. 1 for, at minimum, the season-opening WoO events on Feb. 14-16 at Bubba Raceway Park in Ocala, Fla., and Feb. 20-22 at Volusia Speedway Park in Barberville, Fla.

“This team is going to go on racing because of Josh,” Mark Richards said. “That’s Josh’s wishes for us, to soldier on here. He wants this team to keep racing because he wants to be involved — in the shop, at the racetrack. He’s coming down (to Florida) Monday and Tuesday when we test (at Volusia) to help Brandon get comfortable.

The elder Richards also pointed out this won’t be the first time that his race team has competed without Josh. Mark has, after all, fielded a race car for nearly two decades, including a stretch of the 2012 season during which Josh moved south to compete on the NASCAR Nationwide Series.

“This race team raced when Josh was away to run Nationwide,” said Mark Richards, who hired Sheppard when Josh pursued his NASCAR aspirations in 2012. “And even before Josh was a driver this race team was already intact. Timmy Hitt was the first driver who raced the Rocket Chassis house car (in the mid-‘90s) and then there were multiple drivers — Davey Johnson, Steve Francis, Bart Hartman — before Josh came along and filled the seat for the last 10 years.”

Sheppard, 21, filled in admirably for Josh in 2012, putting together a head-turning six-month stretch highlighted by his first-ever WoO victory late in the season at Belle-Clair Speedway in Belleville, Ill. He returned to his family-owned team in 2013 with Josh back racing on dirt but made a cameo appearance in the No. 1 for October’s Dirt Track World Championship at Portsmouth (Ohio) Raceway Park (Josh took a weekend off) and promptly won the event’s $50,000 top prize.

Coming off a 2013 campaign that saw Sheppard become the youngest driver ever to win the UMP DIRTcar Summernationals and DIRTcar weekly titles, there is little doubt that he will serve as a worthy replacement for Richards.

“Brandon has matured a lot since the first day he drove one of the Rocket house cars,” Mark Richards said. “I’d say Brandon’s pretty similar at 21 to where Josh was at the same age. Heck, he just was the youngest champion ever on the Summernationals tour and he’s won in three of the major series there are — World of Outlaws, Lucas (Oil Late Model Dirt Series) and Summernationals. You have to give him at least a little bit of props for that.

“We have full confidence in Brandon. He was Josh’s No. 1 pick to fill in for him while he’s off.”

How long Josh will be sidelined — and, in turn, how long B-Shepp will drive the Rocket house car — is uncertain. In that vein, Mark Richards will simply continue following the national tour and see how the situation develops.

“Josh has got a little bit of a road ahead of him,” Mark Richards said. “He’s got quite a number of tests (scheduled), and then he’ll have to deal with whatever the doctors find and decide the treatment ends up being. It’s not gonna happen quickly, I don’t think. It’s gonna take a little time.

“So our plan right now is for Brandon to be in the car and run as well as he can run — and to run with the World of Outlaws. This team has basically been part of that World of Outlaws culture for quite a while (a regular participant since the national tour was restarted in 2004 under the World Racing Group banner) and we’re going to continue to support the series.”

While Josh’s hopes of defending his WoO LMS title have effectively been squashed — even if he’s able to return after the Florida events, the 60 hardship points he is eligible to receive for each missed race likely wouldn’t be enough to keep him in contention for the title — Mark Richards can still harbor championship aspirations. Sheppard could conceivably remain as the driver of the No. 1 for the entire season and chase the points crown or Mark could combine points earned by Sheppard and Richards to pursue the circuit’s car owner’s championship. (Starting in 2013, the series began keeping separate driver and car owner points standings.)

“The car owner’s points were put in place a year ago by the World of Outlaws for exactly this type of reason — to keep quality teams out here on the road,” Mark Richards said. “Anybody can go down at any time — Timmy McCreadie or Darrell Lanigan or Josh Richards or whoever. And if that driver is up front in the points toward the end of the season, it would be a shame for that car to completely lose everything if something happens to the driver that would keep him out for a while.”

Depending on Josh’s recovery time-table, Mark Richards will consider both points-chasing possibilities.

“We’re gonna see where we are and cross that bridge when we get there,” he said. “If it looks like it’s gonna be later in the year when Josh can come back and Brandon’s in contention (at that time), we’ll probably soldier on with Brandon and run two cars with Josh to finish the season out. I’m not saying that’s gonna happen, but it’s a possibility if it’s very long into the season. If Josh can come back right after Florida, we’ll probably just run for the car owner’s championship.

“But we don’t know — and until he gets better word from the doctors on what he has to do as far as treatment, all we can do is take it day-by-day.”

Yes, Mark Richards Racing Enterprises will press on with Sheppard holding down the fort for an indefinite period of time. But no one with the operation — Mark Richards, the team’s new chief mechanic Randall Edwards (he takes over for 2013 WoO Crew Chief of the Year Matt Barnes, who will assume more of a customer-service role with Rocket Chassis), crew member Cody Duncan — will stop thinking about their main man Josh Richards.

“The No. 1 goal here for the whole team — and as Josh’s dad — is to determine whatever the problem is that Josh has and get him back to 100 percent,” Mark Richards said. “I don’t think there’s anybody here who thinks any different.”

In fact, no one who is part of the World of Outlaws family has anything else on their mind.

“All of us with the World of Outlaws wish Josh a speedy recovery from the medical issues keeping him off the track,” said series director Tim Christman. “It’s impossible to replace a three-time champion with the talent and personality of Josh Richards so we’ll be anxiously awaiting his return to the World of Outlaws Late Model Series.”