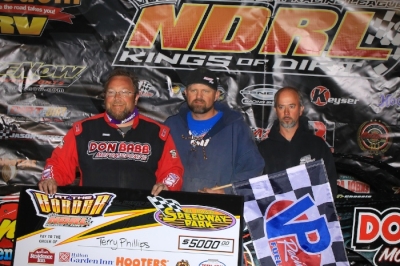 EL PASO, Texas (Jan. 26) — Terry Phillips salvaged a disappointing stretch of January racing with a victory Sunday at El Paso Speedway Park in the finale of the National Dirt Racing League-sanctioned Battle at the Border.

The 47-year-old Springfield, Mo., driver led all 40 laps at the 3/8-mile oval, turning back a mid-race challenge by fellow front-row starter Billy Moyer Jr. of Batesville, Ark., and then pulling away from runner-up Kent Robinson of Bloomington, Ind., in the final laps to win by eight-tenths of a second in the ninth NDRL feature of the month. | Video | Slideshow

Phillips earned $5,000 before his long trip home, helping him put memories of engine failure and a late-race accident that robbed him of two golden opportunities for victories nearly two weeks earlier at Tucson (Ariz.) International Raceway.

“It feels real good,” Phillips said in victory lane. “I’ve gotta thank these two guys helping me here, Stick and Bumper Jones, I mean, I’ve worked 'em hard this weekend … we’d been close over in Tucson and got up on the wall. I don’t know, we just keep trying stuff and kind of fell on something tonight. I’m glad we came out and get a head start on (racing back) home, you know?”

Robinson settled for second for the second straight night while Billy Moyer of Batesville, Ark., was third. John Blankenship of Williamson, W.Va., going for his third straight victory after Friday and Saturday triumphs in El Paso, finished fourth with Jimmy Mars of Menomonie, Wis., rounding out the top five. Moyer Jr. held the second spot with 14 laps remaining but slipped back to finish sixth.

Phillips jumped into the early lead from outside the front row, leaving the Moyers to battle side-by-side behind him while Robinson challenged in fourth. Phillips had a 1.5-second lead after 15 laps, but Moyer Jr. broke away from the battle with his father and pulled within one second by the midway point as Phillips struggled to put Rick Ortega a lap down.

Moyer Jr. nearly pulled alongside Phillips, who had to pinch his car in turn two on lap 25, but a caution the next lap reset the field.

“I figured they was catching up with me,” Phillips said. “When you’re in traffic, you can’t hear. All you hear is a bunch of noise. But I knew if I held my line it’ve been hard to pass me. Some of these guys, they want to race with the leader, evidently. It’s been that way the pass two or three weeks. That’s all right. We’re just fortunate enough to get this hot rod Rocket up here in victory lane.”

When Moyer Jr. chose to restart outside the second row, Robinson took advantage to grab second and chased Phillips three laps before another yellow flag with 10 laps remaining. Robinson stayed with Phillips a few laps after the restart, but Missouri’s winningest Late Model driver over the past 20 years pulled away at the finish.

“The bottom wasn’t as fast as it was last night,” Robinson said. “We went with the same setup we had last night and I knew the bottom wasn’t going to be as good. Terry’s car was just a little bit better than mine, I think. I’m happy to come home second, but it’s still the first loser.”

The first of two cautions appeared on the 26th when William Thomas slowed on the frontstretch and stopped in turn one. Dave Deetz went over the turn-two banking for a lap-30 yellow. Mason Zeigler also stopped during the lap-30 yellow and was pushed to the pits.

Notes: Phillips drives a Hatfield-powered Rocket Chassis sponsored by Andy’s Frozen Custard, Mesilla Valley Transportation, Don Babb Motorsports and New Vision Graphics. … Phillips notched his first career victory in a Rocket after switching from Bloomquist Race Cars last season. “I guess you’re never too old to learn,” Phillips said, adding thanks for Rocket co-founder Mark Richards. … Modified ace Bumper Jones of Mesilla Park, N.M., served as crew chief for Phillips during the week. … Fourteen of 24 starters finished on the lead lap and 18 were running at the finish. ... Ryan Gustin was penalized for jumping a start in his heat race, costing him a shot at the top-six redraw for the feature lineup. In the feature, Gustin was running seventh on the last lap but a flat tire dropped him to 10th. … Fito Gallardo was the only drive to miss the Late Model feature; mechanical problems forced him to scratch after time trials. … An event that competed with a weekend monster truck show struggled to draw fans throughout the weekend with light crowds, especially opening night when temperatures were chilliest. … The event wraps up nine January non-points races for NDRL, which has its first points race Feb. 28-March 1 at East Alabama Motor Speedway in Phenix City. … Drivers who competed in all nine event and maintain their series status with NDRL are guaranteed starting spots in the tour’s feature events throughout 2014.