Blankenship hangs on, goes 2-for-2 in El Paso 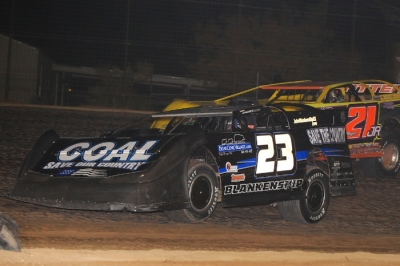 Fighting off repeated challenges from Kent Robinson in the second half of Saturday's 40-lap feature, the third-starting Blankenship led all but 11 laps at the 3/8-mile oval, pocketing $5,000 just 24 hours after collecting a $3,000 victory in Friday’s opener.

Blankenship will go for a three-race sweep Sunday evening at El Paso when NDRL wraps up a stretch of nine January races with another $5,000-to-win main event.

“We’re going to try,” said Blankenship, who won on a slick track Saturday and a moisture-packed track Friday. “It’s a completely different track than it was last night, so we’ll see what tomorrow brings.”

Robinson threw everything he had at Blankenship amid tight racing in lapped traffic on several occasions, actually grabbing the lead exiting turn two and leading a half-circuit just before Blankenship regained the lead just before halfway of the caution-free affair.

“That made it exciting. Actually, I think (lapped traffic) saved me about halfway through the race there. I saw Kent’s nose and I knew I needed to get back to the bottom,” the winner said. “I saw his nose once or twice, and I thought I heard him a couple of times. He had the car to beat and I knew it in the heat race — he was real good.”

But Robinson’s car, sometimes pushing too high in turn two, wouldn’t allow him to overtake Blankenship in several other bids for the lead, and Blankenship wrapped up the victory with just over two laps remaining when he squeezed under a pair of lapped cars in turn three.

“The lapped traffic is what it is. Sometimes it’s better running second when you get to 'em, so I can’t use that as an excuse,” the Bloomington, Ind., driver said. “I just kept making a couple of mistakes, just little by little, and I knew John, he and a good car too, and we were about the same. It was just who made more mistakes — and I think that was me.

“But I can’t hang my head. He’s won the World 100. It’s something to get beat by him. So we’re happy. We’re getting better every time we come out and the crew’s meshing together well, and we’re looking forward to tomorrow.”

Robinson finished barely a half-second behind Blankenship while polesitter Billy Moyer Jr. of Batesville, Ark., led the first 11 laps and settled for third. Fast qualifier and outside front-row starter Ryan Gustin of Marshalltown, Iowa, was fourth and Terry Phillips of Springfield, Mo., rounded out the top five.

The third and final race of Battle of the Border is scheduled for Sunday with with hot laps starting at 5 p.m. MST (later than the originally announced time). The Late Model feature pays $5,000-to-win with modifieds, street stocks and X-mods also in action.

Notes: Blankenship’s Rocket Chassis is powered by a Cornett Racing Engine and sponsored by Coal World’s Energy, Bear Cove Village, Integra Shocks, Todd Case Trucking, X-Coal Energy & Resources, Generator World and Fast Lane. … Blankenship’s El Paso victories are his first since his World 100 victory Sept. 7 at Eldora Speedway in Rossburg, Ohio. … Ten drivers finished on the lead lap and all but three of 24 starters were running at the finish. … Third-place finisher Billy Moyer Jr. said his Xtreme Longhorn by Moyer didn’t handle the track conditions well. “We’ve gotta get that thing better,” he said. “Me and dad, we’re scratching our heads. We’re kind of behind right now and we just can’t get these things to go in the slick. Them guys back in North Carolina (at Longhorn’s Bobby Labonte Racing shop) work real hard, and that’s all you ask for and we’re going to keep working hard.”