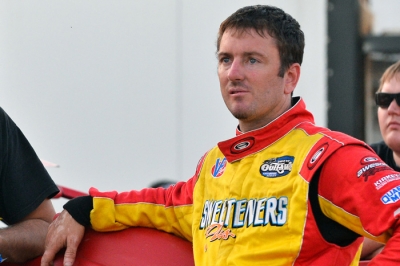 Whether Tim McCreadie can raise his game sufficiently to make a serious run at the World of Outlaws Late Model Series championship in 2014 remains to be seen, but one thing is certain: he isn’t lacking for confidence as he plunges into the chase.

When the national tour’s ’14 campaign kicks off with the Bubba Army Dirt Late Model Winter Nationals on Feb. 14-16 at Bubba Raceway Park in Ocala, Fla., and the DIRTcar Nationals Presented by Summit Racing Equipment on Feb. 20-22 at Volusia Speedway Park in Barberville, Fla., McCreadie fully expects to be in the title conversation.

“I wouldn’t go out on tour if I didn’t think we had a shot at winning the championship,” Watertown, N.Y.’s McCreadie asserted with steely-eyed resolve. “That’s always the focus. Now, it hasn’t worked out that we’ve been a contender the last few years, but we’ve always thought we had good enough cars and help to win a championship and it’s no different this year.”

McCreadie, of course, knows what it takes to be a World of Outlaws champion. He won the crown in 2006, just three years after switching his focus to Dirt Late Model racing from his roots in the Northeast’s DIRTcar big-block modified division.

But since reaching the WoO mountaintop, McCreadie has struggled to find his way back. While he’s never finished outside the top five in the points standings since returning as a series regular in 2010 (he entered only selected WoO events from 2007-2009), he’s only gotten a sniff of a title once. That was in ’10 when he battled Josh Richards and Darrell Lanigan until faltering late in the season and settling for a third-place finish.

McCreadie hasn’t forgotten how to win — with eight triumphs over the past two seasons (three in ’12, five in ’13), he ranks behind only Lanigan (27 wins) and Richards (12) on the WoO LMS victory list for the period — but he has lost the championship formula. He’s simply been too up-and-down, bidding for a win one night and falling completely out of the mix the next. His failure to find consistent speed is evidenced by the combined 26 DNFs he rang up in 2012 and ’13, a number accentuated by McCreadie’s penchant for pulling out of races rather than wallowing at the back of the pack.

McCreadie is well aware of the area in which he needs to improve. In hopes of doing that in 2014, he made an off-season decision with his Sweeteners Plus Racing team to reunite with Rocket Chassis, the car make he hasn’t driven exclusively since 2010. He spent much of the 2011 season running a Victory Circle car and campaigned Warrior Chassis machines in 2012 and ’13.

“The last time we were really, really comfortable in our equipment and were a real threat to win the championship the whole way through the year, we were in Rocket stuff,” said McCreadie, who has two new Rocket mounts ready for action. “It was just me and Al (Stevens) working on the cars back then too, but we have three guys now (including crewmen Craig McCrimmon and Johnny Coco) and we have more people who can come to races and help. So really, I feel like our program is stronger today than it was in 2010 and even back when we won the championship in ’06. I think we have a stronger core with everything now, so, as long as I can get up to speed with the Rockets, I think we can win like we were winning last year and not be as bad as we were in other races.

“That’s what it’s gonna take. You can’t finish 15th or drop out and contend for the championship. You’re gonna have to be able to match what the best two cars the last few years are able to do — that’s Darrell and Josh. They’re the standard right now and we’re doing everything we can to match up with them.”

McCreadie figures to benefit from working closely throughout the season with Richards, the three-time and defending WoO champion, and Richards’s father Mark’s Rocket Chassis house car team. With Lanigan leaving the Rocket fold to start up his own car-building business, McCreadie becomes the highest-ranked driver besides Richards running Rocket machines on the circuit.

“It was a company decision more than anything,” McCreadie said of his team’s move to Rocket. “Business-wise, it just makes sense. Vic (Coffey, McCreadie’s Sweeteners Plus teammate) drives ‘em and he likes his cars, and we decided that as a company that’s the direction we should go to keep everything more in line.

“Then after talking with Mark and those guys down at Rocket — they’re just really good at helping people. Warrior (led by Sanford Goddard) is really good with helping people too, don’t get me wrong. It’s just that there’s more of these (Rocket) cars out there, so that should help me get a baseline (setup) at some places where I struggled last year and hopefully I won’t struggle like that again.”

With McCreadie ready to celebrate his 40th birthday on April 12, he understands that he’s in his racing prime. He’s counting on using the larger pool of technical information available at Rocket to maximize the years ahead of him.

“I think I’m in a little bit different point in my career,” McCreadie said. “I want to race, but it’s no secret you can’t race forever. I hope I have at least a decade left of being physically fit enough to be at the top of my game and I want to make the most of it – and I think (running Rocket cars) gives me the best shot to do that.

“It’s not a shot at anybody, but at this point I just don’t feel like I have the time to be testing and cutting stuff apart to figure things out. I just need to be on the same page with a lot of other people and then hopefully we have enough money put into our equipment, our motors, our tires — our whole program — that I’ll be competitive more consistently and won’t have the 15th-place finishes and the dropouts.

“Who knows how everything will turn out?” he continued. “We could run worse, but hopefully we can capitalize on these Rocket cars being proven to be pretty good and us being out there on the road with Mark and those guys. I think if we take what we learned going out there on our own the last couple years and combine it with the help we can get running Rocket cars, we can put some good results up.”

McCreadie will begin his championship quest in the Sunshine State, running at two tracks that he gives high ratings. He’s enjoyed success at both speedways, winning Dirt Late Model and big-block modified features at Volusia and finishing as high as second (twice) in WoO competition at Ocala.

“I really enjoy both of those places,” McCreadie said. “I don’t know if it’s the speed and the layout of the tracks or what, but they just feel more comfortable for me to race on them.

“I’m never gonna complain about Ocala,” he continued, singling out the egg-shaped, 3/8-mile oval promoted by syndicated radio show host Bubba the Love Sponge Clem. “The thing we always wish for as race car drivers is a place that gets racy and wide for the feature, and that place has a tendency to do that. More often than not, you can race all over it. Plus, they put up really good money, you get treated good and it’s a nice, clean facility. You can’t ask for anything more.

“And for me, Volusia has always just been a natural fit. I feel comfortable there all the time – and that track, when it’s prepped right where there’s a top and a bottom and it’s black in the middle, is amazing. It’s just so wide and a lot of fun to race on.”

The sprawling half-mile Volusia oval is a special place for McCreadie, who grew up watching his father, legendary big-block modified driver “Barefoot” Bob McCreadie, compete there in February and became a Volusia winner himself when he climbed into the cockpit. McCreadie actually won the first Dirt Late Model feature of his career at Volusia — UMP DIRTcar-sanctioned event Feb. 9, 2004 — and one year later, on Feb. 19, 2005, made the track the site of his first-ever WoO victory.

“I can’t wait to get down to Volusia every year,” said McCreadie, who also won two UMP races there in 2005 and pulled off a thrilling triumph over Lanigan and Billy Moyer in last year’s UMP finale. “Ocala kind of builds you up with great money and real good racing, and then you go over to Volusia and it’s really hard to argue about how great that (DIRTcar Nationals) week is just because of that Daytona crowd.

“Volusia is always gonna have a little more amped-up atmosphere just because there’s so many people there you probably will never see anywhere else all year long. There’s people from all types of racing, whether it’s sprint car guys who stick around for a few days to watch, or guys from the Daytona track, or even guys from over at the asphalt track at (New) Smyrna who stop in for a night.

“It’s just such a huge thing all week. I just love the whole idea of Speedweeks there. To be there and race and be part of the whole atmosphere, it’s just so exciting to me.

And a triumph during the Florida excursion would certainly go a long way toward making McCreadie’s World of Outlaws championship dreams come true.

“The goal this year is to go down to Florida and hopefully win some races,” said McCreadie, whose cars will sport a new look this season with the familiar No. 39 on their doors designed to mirror the number plate that appeared on the off-shore boats his team owner, Carl Myers, used to race. “If we can do that, hopefully we’ll be in the thick of this championship thing all year long.”