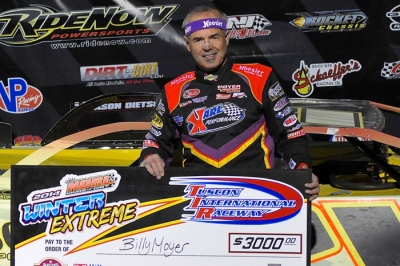 “We’ve got a heck of a good car here,” said Moyer, whose victory followed finishes of second and seventh in the week’s first two events. “To run it three times now and have a good finish every time, I’m very happy.”

Making his Winter Extreme debut, Sheppard settled for second with polesitter Chase Junghans of Manhattan, Kan., third. Ninth-starting Jimmy Mars of Menomonie, Wis., was fourth, while Chris Simpson of Oxford, Iowa, advanced from 19th to round out the top race’s top five finishers.

Phillips was 21st in the final rundown after a lap-26 tangle among the leaders knocked him out of the race. The unfortunate ending marked the second straight disappointing finish for Phillips, who had mechanical troubles while leading Sunday’s Winter Extreme feature.

Starting from the outside of the front row Moyer grabbed the early lead over Junghans and cruised through the early portions of the 30-lap race. His only challenge in the first half of the race was negotiating traffic, which he did with only a slight bobble when he briefly jumped the turn-two cushion on lap 10.

Third-starting Phillips finally topped a back-and-forth battle with Junghans by lap 17 and set his sights on Moyer. Phillips caught Moyer as the leaders entered lapped traffic on lap 23, and soon sixth-starting Brandon Sheppard closed in to make it a three-car battle for the lead.

Racing just behind Moyer, Phillips and Sheppard ran side-by-side on laps 24 and 25 before a lap-26 bobble by Moyer forced the high-running Phillips to check up and climb the wall on the back straightaway. Phillips was able to keep his car from turning over, but was forced to pull to the infield on the following lap.

Moyer’s bobble also allowed Sheppard to look low for the lead entering turn three on the same lap, but Sheppard’s hard charge into the corner forced him to drift high into the side of Moyer’s car.

“I was just trying to bide my time,” Moyer said of the close call on lap 26. “We caught them lapped cars again and Brandon got into me a little bit. I went up high and I knew I had to get up on the wheel and get the job done then.”

Sheppard settled for the runner-up finish in his first race of the season, but was disappointed not to claim the victory.

“I feel like we had a car that probably could’ve won,” Sheppard said. “It’s just one of them deals. I made one mistake and Moyer compensated. But it was a pretty good night overall for our first time here.”

Notes: The winner’s Moyer Xtreme by Longhorn car is powered a Clements Racing Engine with sponsorship from Henderson Motorsports, Banner Valley Hauling, Car Quest, Cooley Transport, L&D Trucking, and J&J Steel. ... Moyer claimed his 12th-career Arizona victory. ... The race’s only caution appeared when Mike Balcaen of Winnipeg, Manitoba, slowed from a top-10 spot on lap 13. ... Kent Robinson of Bloomington, Ind., advanced from 15th to finish sixth. ... Steven Pfeifer of Minot, N.D., went took a wild rollover ride in a consolation race; he wasn’t injured. ... The Winter Extreme takes its final off night on Thursday before returning Friday with the first of three straight race nights to wrap the six-race miniseries. DirtonDirt.com will provide live video coverage of the event.