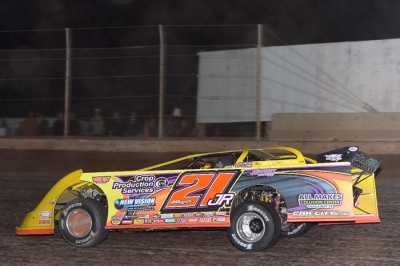 TUCSON, Ariz. (Jan. 12) — Polesitter Billy Moyer Jr. of Batesville, Ark., regained the lead when second-starting Terry Phillips of Springfield, Mo., slowed on lap 11 of Sunday’s Winter Extreme feature and led the remainder of the 40-lap race for a $5,000 victory in the second round of Tucson International Raceway’s six-race miniseries.

Moyer’s victory, which came in a non-points race for the National Dirt Racing League, marked his first triumph in his new Longhorn Chassis. Sunday’s race was just his second start since he and his Hall-of-Fame father Billy Moyer switched to Bobby Labonte Racing’s in-house chassis brand over the offseason. | Complete Winter Extreme coverage

“I’m really ecstatic. The car was really really good,” said Moyer, who finished 11th in the Winter Extreme opener on Saturday. “We missed a little bit last night, but we got it back tonight. We had a little luck on our side, but hey, that’s part of racing.”

Tony Toste of Pismo Beach, Calif., led a strong showing by Western drivers in finish second with Jimmy Mars of Menomonie, Wis., third. Clay Daly of Watsonville, Calif., was fourth, while hometown driver R.C. Whitwell followed up his opening round victory on Saturday night by advancing from 10th to round out Sunday’s top five finishers.

After dropping into to second on the race’s initial start, Phillips stalked Moyer through the race’s first four laps. A turn-two slipup by Moyer on lap five allowed Phillips to shoot by for the lead down the back straightaway.

But Moyer soon got a reprieve when Phillips slowed with mechanical issues to bring out the race’s second caution on lap 11.

“I made a mistake there, and I knew it,” Moyer said of his lap-five miscue. “Coming out of turn two, I buzzed my tires and my car drifted up the track, and knew if somebody was on my tail, they were gone."

“I just followed him and thought maybe we’d get him back in lapped traffic. But he had some bad luck and we got it. But we’ve lost them that way too, so we’ll take this one. We definitely need it.”

Pulling away from Toste and Mars, Moyer established himself as the dominant car through the race’s middle portions before lapped traffic in the closing laps allowed Toste to close the gap.

With Moyer stuck behind slower traffic, Toste pulled to his back bumper just after the five-to-go mark before a caution with two laps remaining spoiled his late charge. Moyer pulled away after the final restart.

“I was worried,” Moyer said. “I seen that caution come out, and I was like 'Whew.' That was a lifesaver.”

The race opened with a nine-lap green-flag run before Justin Kay of Wheatland, Iowa, slowed from the seventh position and came to a stop on the front straightaway.

Phillips’ misfortune caused the second caution, and Tony Jackson Jr. of Lebanon, Mo., slowed on lap 20 to bring out the third yellow flag. The final caution appeared when sixth-running Ryan Gustin of Marshalltown, Iowa, slowed in turns one and two.

Top four in each group inverted for heat race lineups