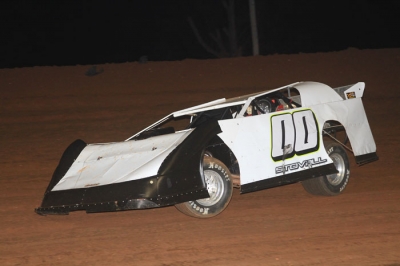 SPRINGFIELD, Mo. (Nov. 30) — Jesse Stovall of Galena, Mo., led all the way Saturday at Springfield Raceway for a $2,000 victory in the unsanctioned Turkey Bowl VII for Super Late Models.

“This is one of the funnest racetracks we race at anywhere,” Stovall said in victory lane at the quarter-mile oval. “For as small as it is, it carries an absolute ton of speed.” | Video | Slideshow

Tony Jackson Jr. of Lebanon battle Stovall for the early lead, but he fell back and eventually out of contention with a flat tire. Last year’s winner Kyle Beard of Trumann, Ark., ran third early in the event but ended up 14th.

Notes: Stovall raced just a few days after an announcement that he’d serve as the Midwest house car driver for Bakersfield, Calif.-based Victory Circle Chassis in cars owned by Steve Rushin and Bill Swafford in 2014. … Terry Phillips reversed the finish in the modified feature, outrunning Stovall for the victory. … Missouri drivers swept the top four spots.