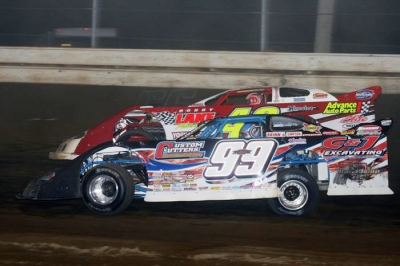 "He looked like he was getting a little bit loose off the turns and just kept biding our time and biding our time, and I just went for it there at the end," the fifth-starting Moran said in victory lane.

Horton, of Bruceton Mills, W.Va., settled for second ahead of 15th-starting Duane Chamberlain of Richmond, Ind., Mike Knight of Ripley, N.Y., and 20th-starting David Scott of Garland, Pa., on the 3/8-mile oval in northeast Ohio.

Two early leaders fell out of contention on the 23rd lap. After Horton led the first 15 laps from outside the front row, polesitter Robbie Blair of Titusville, Pa., took command with an outside pass on the 16th lap. Seventh-starting Josh Richards of Shinnston, W.Va., overtook Blair on the 20th lap, but when Blair tried to regain the lead three laps later, both drivers spun in turn two. They had to restart on the tail, handing the point to Horton.

Notes: Moran's MasterSbilt Race Car is sponsored by Custom Cutters, Eddie's Sunoco and C&J Excavating. ... Moran pocketed an extra $1,500 for winning the Rapid Refund Week miniseries on the IRS tour, which was made up of five Ohio events from May 23-31. Moran topped Tim Dohm by nine points. ... Todd Andrews of Eldred, Pa., was running third when he slowed with mechanical problems to bring out a caution on lap 36. ... Keith Berner and Terry Porter scratched from the feature lineup. ... The series takes a few weeks off before a $5,000-to-win event June 14 at Portsmouth (Ohio) Raceway Park.