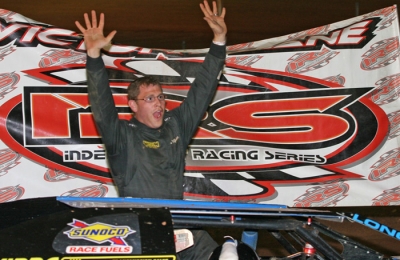 Robbie Blair of Titusville, Pa., dropped Carrier, of Salt Rock, W.Va., to third in the final laps while Duane Chamberlain of Richmond, Ind., was fourth for his second consecutive top-five finish on the IRS tour. Dave Hess Jr. of Waterford, Pa., rounded out the top five.

The high-running Carrier was in control from the outset, but Steve Shaver of Vienna, W.Va., and then R.J. Conley, beginning on the 19th lap, began hounding the polesitter. Further back, McGuire was working his way into contention before a lap-27 scramble that involved Conley, dropping him from contention. McGuire was up to second following a lap-38 caution and found moisture in the low groove to work under Carrier with 10 laps remaining for a lead he'd never give up.