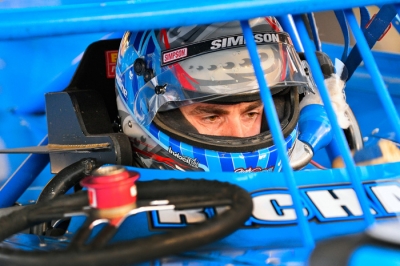 Josh Richards has a third WoO title within his grasp. (thesportswire.net)

The World of Outlaws World Finals on Nov. 7-9 at the Dirt Track at Charlotte is shaping up as a coronation for Josh Richards, whose season-long success has him standing at the precipice of a third career World of Outlaws Late Model Series championship.

But that doesn’t mean the concluding weekend of the national tour’s 2013 campaign will be devoid of points-race drama. Several spots in the WoO points standings remain contested, putting thousands of dollars in points-fund cash on the line during a World Finals spectacular that features a pair of 50-lappers paying $12,000 to win.

Richards, 25, of Shinnston, W.Va., is on the cusp of writing his name on the biggest points-fund check: $100,000 for the circuit’s 2013 champion. With Richards entering the World Finals holding a 106-point lead over defending champ Darrell Lanigan of Union, Ky., and 110-point edge over Shane Clanton of Zebulon, Ga., only utter calamity for the young star — and a perfect weekend for one of his closest rivals — can stop him from becoming the first three-time champ of the WoO’s World Racing Group era (2004-present).

If Lanigan were to win both World Finals features — a feat that only Jimmy Owens of Newport, Tenn., has pulled off in the six previous installments of the blockbuster event — Richards would need only to record a pair of 26th-place finishes to secure the points crown. If Clanton, meanwhile, were to capture both races, Richards would need just two 27th-place finishes to stay ahead for the title.

Those scenarios are not outside the realm of possibility because at least 27 cars are scheduled to start each feature, but their likelihood would seem remote considering the degree of difficulty associated with one driver sweeping the hyper-competitive weekend and Richards’s own history of performance on the tour.

End-of-the-line finishes are, of course, extremely rare for Richards. In the 350 series starts he's made since debuting on the tour as a fresh-faced 16-year-old in 2004, he has finished 20th or worse 12 times — just three percent of his career races. The only back-to-back 20th-or-worse outings of his career came in 2004 when he tallied 24th-place finishes on July 16 at Oklahoma’s Outlaw Motor Speedway and July 21 at Delaware International Speedway.

Richards has experienced bad luck at Charlotte in the past — witness the worst finish of his WoO career (28th in the 2007 Colossal 100), the last-lap flat tire in the 2011 World Finals finale that cost him the points championship and terminal engine trouble during Friday-night practice last year that forced him to his backup car and ultimately led him to provisional-starter status in the feature — but he’s enjoyed plenty of success as well. In fact, he’s the only WoO regular to win a World Finals main event.

This season Richards has sparkled on the series, racking up 30 top-five finishes (including nine victories and seven runner-up placings) and 39 top-10 runs in 44 events. He has just two DNFs (a 19th-place finish on Sept. 13 at Belle-Clair Speedway in Belleville, Ill., is his worst performance) and would surpass $350,000 in total earnings (including points fund) if he were to sweep the World Finals weekend.

With Richards the presumptive champion, the battle for second place in the WoO points standings will garner the most attention during the World Finals. Lanigan and Clanton are separated by a mere four points, so one misstep by either driver could prove critical.

Clanton held the second spot in the standings for most of the season after ceding the lead to Richards following the third event. He dropped to third behind Lanigan twice during the summer but quickly rebounded each time, regaining second at the next event. Clanton is hoping for more of the same at Charlotte; he enters the weekend having relinquished sole possession of second in the points race to Lanigan in the tour’s last event, on Sept. 21 at Berlin Raceway in Marne, Mich.

The importance of the Lanigan-Clanton battle is significant on the financial front. There’s a $20,000 difference in points-fund payout — second place receives $60,000, while third place will settle for $40,000.

Rick Eckert of York, Pa., currently sits fourth in the points standings, 76 points behind Clanton and 80 in arrears of Lanigan. The 2011 WoO champion can still vault to second place but will need both Lanigan and Clanton to experience awful weekends; he is in no danger of losing the $35,000 fourth-place slot, however, because he leads fifth-place Tim McCreadie of Watertown, N.Y., by 290 points.

McCreadie appears to be in good shape to claim the $30,000 fifth-place points prize, but he can’t totally relax at Charlotte. His edge of 82 points over sixth-place Tim Fuller of Watertown, N.Y., and 86 points over seventh-place Eric Wells of Hazard, Ky., is comfortable but by no means insurmountable.

Fuller and Wells find themselves in a nip-and-tuck battle for sixth place in the standings, which is worth $25,000 compared to $24,000 for seventh. They have a substantial buffer to eighth-place Chub Frank of Bear Lake, Pa., who is 90 points behind Wells.

Positions 8-10 in the final standings – worth $23,000, $22,000 and $21,000, respectively – will likely not be decided until the final checkered flag at The Dirt Track. Frank is in the driver’s seat for the eighth position, but he leads Bub McCool of Vicksburg, Miss., by just 22 points and Morgan Bagley of Longview, Texas, by 50 points.

Clint Smith of Senoia, Ga., is resigned to an 11th-place finish in the points standings, leaving him out of the running for points-fund cash. His 452-point deficit to Bagley is too much to overcome in the final two races.

Wells, 24, also enters the World Finals with the 2013 WoO Rookie of the Year award almost in his grasp. He holds a healthy 140-point edge over the 27-year-old Bagley in the overall points standings, but with the rookie honor determined using drivers’ best 30 finishes Wells’s advantage in the first-year driver battle is a more modest 52 points (3,972-3,920).

Bagley remains mathematically alive for the rookie title, but he will need an epic performance during the World Finals. If Wells cannot finish high enough to replace the 14th- and 13th-place finishes that are currently the worst on his ledger, Bagley (replacing 15th- and 14th-place finishes) could steal the $10,000 rookie prize by six points with two victories or two points with a win and runner-up finish.

The 2013 WoO champion will be honored publicly in front of The Dirt Track’s massive grandstand at the completion of the World Finals finale on Sat., Nov. 9. The titlist and his fellow World of Outlaws regulars will receive their points-fund checks on Nov. 10 during the circuit’s annual awards banquet at the Great Wolf Lodge in Concord, N.C.

The World Finals begin Nov. 7 with the big qualifying night featuring two rounds of WoO Late Model and Sprint Car time trials and two sets of Super DIRTcar Series big-block modified heats. Each division’s first round of qualifying will apply to Friday’s program and the second round to Saturday’s racing card.

The Late Models and sprints will compete in full programs (heats, consolations, features) on Nov. 8, and Nov. 9 while big-block mods will contest consolation races and 40-lap features each evening.

For tickets, log on to www.charlottemotorspeedway.com or call (800) 455-FANS. Three-day packages are available for $79 and $34 for children 13-and-under. Fans who can’t make the trip to Charlotte can still watch all the racing live online via pay-per-view at DirtonDirt.com.