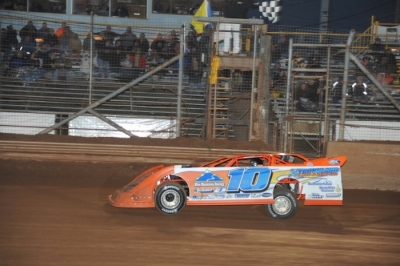 Starting sixth, Ferree collected $3,000 for his third series victory of the season as he outran hometown driver John Garvin Jr. Brian Swartzlander of Leechburg, Pa., who won the event’s big-block modified feature, was third in the ULMS main ahead of Jared Miley of South Park, Pa., and Matt Lux of Franklin, Pa. Polesitter Russ King of Bristolville, Ohio, finished 19th.

King jumped inot the lead at the outset over Garvin with two caution slowing the action over the first two laps, and Ferree made early progress to grab the second spot by the fifth lap after Miley and Lux made hard contact two laps earlier.

After another pair of cautions, Ferree took the lead on a lap-seven restart and pulled away while King and Garvin battle for second. Two late cautions appeared in the 25-lapper, and King made a hard charge after a lap-21 restart that saw his No. 56 jump the cushion in turns one and two. Garvin held the second spot but Ferree won the race to the checkers.