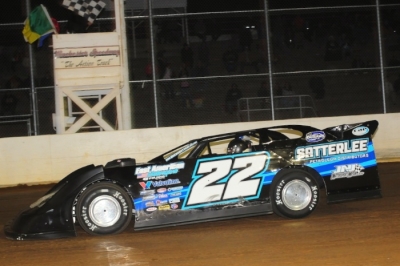 WINCHESTER, Va. (Oct. 26) — While the racing season is slowing down, Gregg Satterlee of Rochester Mills, Pa., is having none of it. The 29-year-old driver completed a weekend sweep Saturday at Winchester Speedway’s inaugural Gunter’s Honey Fall Classic, adding a $5,000 victory to his Friday night’s $3,000 payday. | Video | Slideshow

Satterlee led all 75 laps of feature action on the weekend at the 3/8-mile oval, including 40 in Saturday night’s finale in outrunning hometown drivers Kyle Hardy and J.T. Spence.

“This is a great way to end our season,” said Satterlee, who drove his Robby Allen-prepared entry to victory. "Lapped cars we're getting pretty hairy out there and I saw J.T. pull alongside me a couple times, so I knew I had to be careful getting through, and it all worked out pretty good.

“Robby had this car perfect all weekend,” the winner added.” Starting spot means a lot here a Winchester, but I was able to put this car wherever it need to go, and as a driver, you can't ask for more than that. It's a shame to see the season end with as good as we've been running lately.”

Spence and Satterlee started on the front row Saturday with Satterlee getting the jump into turn one. While he’d go on to lead all the way in a near-mirror image of Friday’s performance, Spence pressured Satterlee in looking for his track-leading eighth victory of the season.

Spence’s chances ended when he hopped the cushion in turn one on lap 39, losing the second spot to Hardy. Ronnie DeHaven Jr. gave Winchester three drivers in the top five while Mark Pettyjohn of Milton, Del., rounded out the top five.

Notes: Satterlee’s Rocket Chassis is powered by a Roush Yates Engine and sponsored by Satterlee Petroleum Distributors, East American Motorsport and Zero Wraps. … Satterlee has eight victories overall in 2013, including three at Winchester. … He plans on wrapping up his season in World of Outlaws Late Model Series action at the World Finals in Concord, N.C. … Trever Feathers will be crowned Winchester's Late Model champion at the track's Nov. 16 banquet.