Sheppard rises to No. 6 in Top 25 power rankings 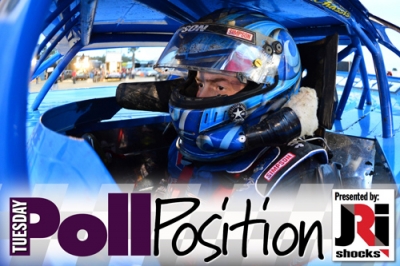 Fresh off the biggest victory of his young career, 20-year-old Brandon Sheppard of New Berlin, Ill., headlines a list of three drivers on the move in DirtonDirt.com's latest Top 25 power rankings presented by JRi Shocks.

Sheppard (pictured), who claimed Saturday's Dirt Track World Championship at Portsmouth (Ohio) Raceway Park while making a guest appearance in the Rocket Chassis house car, jumped five spots before settling at No. 6 in the weekly poll.

Along with Sheppard, Jackie Boggs of Grayson, Ky., and Jason Feger of Bloomington, Ill., also made an upward charge in the rankings. Boggs catapulted six spots from No. 24 to No. 18, while Feger ascended another three notches to No. 12. Each driver scored a top-five finish in Saturday's DTWC.

Darrell Lanigan of Union, Ky., remains atop the power poll once again this week, with familiar faces Josh Richards of Shinnston, W.Va., Jimmy Owens of Newport, Tenn., John Blankenship of Williamson, W.Va., and Steve Francis of Ashland, Ky., completing the top five. Lanigan secured 13 out of a possible 21 first-place votes this week, while Richards and Owens split the remaining eight first-place votes.

Despite notable movement in the poll, no new drivers entered the rankings this week. Jonathan Davenport of Blairsville, Ga., Dennis Erb Jr. of Carpentersville, Ill., and Eddie Carrier Jr., of Salt Rock, W.Va, are among drivers on the outside edge of the rankings.

After restricting poll voting to staffers the previous two seasons, DirtonDirt.com invited more than 30 media members and drivers along with track, series and manufacturer representatives to vote in this season’s rankings. Twenty-one submitted ballots this week. Weekly polls continue through mid-November.

Comment: Steps away for a vacation, but the Rocket house car team doesn't miss a beat in his absence. Series points: 1st (World of Outlaws). Last week’s ranking: 3rd (+1)

Comment: Among the frontrunners all weekend at Portsmouth in what could have been his final event of the season. Series points: 1st (NDRL). Last week’s ranking: 6th (-1)

Comment: Looks strong out front early at Portsmouth, but slows mid-race with a vibration and then a flat tire. Series points: None. Last week’s ranking: 9th (nc)

Comment: Calls it a weekend after being caught up in a heat race accident on Friday at Portsmouth. Series points: 2nd (Summernationals). Last week’s ranking: 8th (-3)

Comment: Continues his recent streak of strong runs with a high-side charge and a top-five finish in the DTWC. Series points: None. Last week’s ranking: 15th (+3)

Comment: A recent string of mechanical issues and DNFs in major events has slowed his wave of mid-season momentum. Series points: None. Last week’s ranking: 12th (-2)

Comment: Back in Paul Crowl's No. 7 Rocket for the Delaware State Championship, where he finishes fourth. Series points: 4th (World of Outlaws). Last week’s ranking: 14th (-1)

Comment: Slowed by his nosepiece and an unexpected invert, but still almost muscles his way to DTWC victory lane. Series points: None. Last week's ranking: 24th (+6)

Comment: Bests a big field for $2,000 on Friday at Talladega and backs it up with a runner-up finish on Saturday. Series points: None. Last week's ranking: 25th (+1)

Comment: Gets off to a fast start on Friday at Portsmouth, but his weekend stalls with Saturday's 100-lapper. Series points: 4th (Lucas Oil). Last week’s ranking: 23rd (-2)