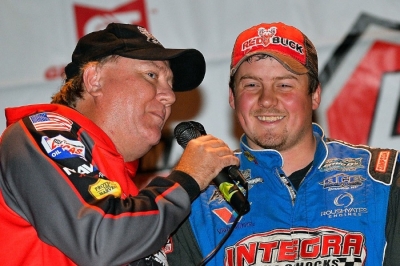 When a yellow flag appeared on lap 40, Mark Richards decided to signal his fifth-running driver to try the high groove on the restart. Brandon Sheppard was subbing for Josh Richards, Mark’s son, but the elder Richards was confident in the 20-year-old from New Berlin, Ill.

“You just can’t send just anybody to the top,” Richards said. “Josh is able to go to the top, anytime we send him up there, he’ll go do it, and this guy here is as good as there is on the top.”

His confidence wasn’t misplaced as Sheppard used the restart to launch from fifth-to-second over a half-lap stretch, then overtook race-long leader Scott Bloomquist on lap 43 for a lead he’d never give up in the $50,000-to-win event on the Lucas Oil Late Model Dirt Series, the first DTWC victory for the team.

“It's great for Brandon to do it, because he’s a great kid, and he’s very humble,” Richards said.

Did Sheppard have any inkling he’d be a Dirt Track World Champion? “Not this young,” he told Lucas Oil Series announcer James Essex in victory lane.

But count Richards among most observers at the DTWC who weren’t surprised that Sheppard became the youngest winner in race history. After all, he spent most of the 2012 season with the Rocket team while Josh Richards went NASCAR racing, and in 2013 returned to his family-owned equipment and became the youngest UMP DIRTcar Summernationals champion while also adding the UMP weekly title.

“We continued working with him this year. We’re in constant contact with him all the time like through the Summernationals,” said Richards, adding that Sheppard spent the previous two weeks at Rocket’s Shinnston, W.Va., shop following the Lucas Oil Late Model Knoxville Nationals

“We knew he was going to drive this race, so he just stayed over,” Richards said. “He’s a great kid. Unbelievable.”

Sheppard kept a pair of veteran Kentucky drivers in check over the last half of the 100-lap feature as 46-year-old Steve Francis of Ashland finished second while 41-year-old Jackie Boggs of Grayson finished third. Francis started 15th and broke into the top five as Sheppard was making his winning move, and he thought at that point he had a chance to win. Sheppard convinced him otherwise.

Sheppard capitalized on an opportunity to drive for one of the sport’s best teams, Francis added.

“Mark picked him up and, you know, last year when Josh went to do the pavement thing, and you’ve gotta give him credit,” Francis said. “He was smart about everything he did. He obviously learned a lot. Josh has taught him a lot. And you know, that’s as good of equipment as there is anywhere in the country, too, with as good a crew and as good as everything you could have.”

Jason Feger of Bloomington, Ill., the DTWC’s fourth-place finisher, has turned thousands of laps with Sheppard and knew he was capable of such a victory.

“It was great to see Brandon win ... he’s working really hard and come a long way. I’m really happy for him,” Feger said. “To jump in a different car and different motor and stuff — of course it’s all top-notch — but he’s come a long way. We were teammates for a long time in the Pierce Cars, and you know, I’ve watched him and been helping him since he was 14.

“He’s really done well for himself and he’s got a good career ahead of him. I’m just really glad to see it. The whole family treats me like family, and they’re great people and they deserve it.”

Sheppard blamed himself for losing Friday’s first heat race when he stayed in the high groove too long, allowing Earl Pearson Jr. to win the prelim. But Mark Richards told him not to worry about it.

“It’s like I told him, I said 'Here’s the deal. He passed you because you didn’t know where to go.' ... I said, 'If you’re leading that race, you don’t know where to go.' I said, so you’re better off not to be leading,” Richards said. “It worked out tonight because he got to go use that top. (If Sheppard would’ve started closer to the front), somebody could’ve passed him. He could’ve been leading it, and somebody could’ve used the top and passed him, because that top was good there about lap 40.”