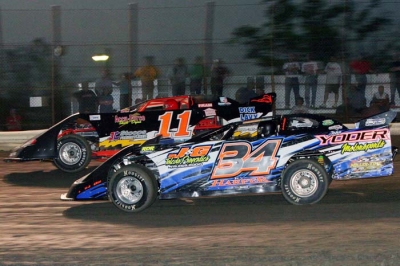 GAS CITY, Ind. (May 30) — Starting outside the front row at Gas City I-69 Speedway, Rusty Schlenk of Jackson, Mich., powered to his first victory on the Sunoco American Late Model Series since 2006. Schlenk, driving the Lawrence Motorsports No. 11 previously driven to ALMS championships by Jerry Bowersock and Brian Ruhlman, earned $2,000 for the victory on a night when rain halted the action early. | Slideshow

Fifth-starting Rob Starkey of Greenfield, Ind., posted his best career series performance with a second-place finish ahead of Ruhlman, of Clarklake, Mich., Randy Woodling of Warsaw, Ind., and Rusty Seaver of Stanton, Mich. The event drew 18 Late Models to the track which runs sprints, but not Late Models, on a weekly basis.

Schlenk led early before polesitter Ky Harper grabbed the point for a few laps. Schlenk regained the lead and was out front when rain brought the race to a close. Harper spun late in the race, knocking him out of contention.

Notes: The winner's Rocket Chassis is sponsored by Dick Lavy Trucking, Accu-Force and Stoops Freightliner. ... Schlenk, the 2006 ALMS champion, has six career series victories. His last, on Sept. 16 at Fremont (Ohio) Speedway, clinched his championship. ... Former sprint car champion Corey Bevard, last week's feature winner at Butler (Mich.) Speedway, was 10th. He's in his first full season of Late Model racing. ... The modified, street stock and thunder car features were rained out and will be rescheduled. ... The series wraps up its weekend in the Hoosier State with a $2,000-to-win feature at Kamp Motor Speedway in Boswell, Ind., on Saturday night.