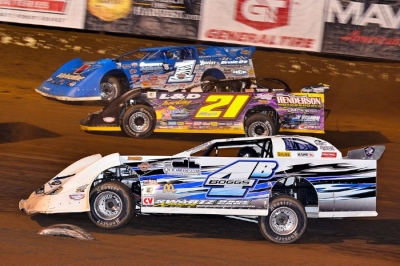 Winner Brandon Sheppard (1) rolls on the high side. (thesportswire.net)

PORTSMOUTH, Ohio (Oct. 19) — Just when you thought every competitor was settling into the low groove at Portsmouth Raceway Park, someone would jump into the high groove and make a run toward the front.

The combination of varied tire selection and a racing surface that retained moisture from afternoon rain made for plenty of excitement at the 33rd annual Red Buck Dirt Track World Championship, no more than when winner Brandon Sheppard’s outside charge on a lap-40 restart carried him from fifth-to-second in a quarter-lap stretch, and into the lead two laps later.

“After a restart, that outside, I guess the moisture where it rained earlier today, that outside would bleed back a little bit, and man, you could make a run for about three laps,” said runner-up Steve Francis, who chased Sheppard to the checkers in the Lucas Oil Late Model Dirt Series season finale. “I would’ve like to have had a restart with five (laps) to go and gave it a shot.”

Mark Richards, owner of the Rocket Chassis house car who tapped Sheppard to substitute for his vacationing son Josh, knew the outside would be fertile ground for the 20-year-old driver from New Berlin, Ill., who became the youngest-ever DTWC winner.

“I saw some cars back there in the back, I seen some cars really getting a good run off that top, and he loves the top,” said Richards, who signaled to Sheppard during the lap-40 caution period.

“I got down and told him, when the caution came out there, I think on lap 40 or whatever lap it was, when he was running fifth, I said, 'Go to the top and get your elbows up.' Luckily four laps later the caution came out and he was leading, and I said 'Get to the bottom!' Because we ain’t going to make it to 100 up there like that.”

Third-place finisher Jackie Boggs, fourth-place finisher Jason Feger and Jonathan Davenport were among other drivers who found success in the high groove. Feger, who started 14th, was running seventh on a lap-64 restart and gain three more spots over the next 10 laps.

“I was able to make it work for a little bit here and there,” the Bloomington, Ill., driver said. “The tires made the race pretty interesting. Guys would come and go, and the track would kind of change. You really kind of had to keep chasing it around. It made for a good race, I think.”

“There was a lot of different tire combinations out there. You could cool them down on the restarts and they’d really rip really good.”

As long as you didn’t stay on the high side too long, he added.

“That top, if that top would’ve been a little smoother, I think I probably could’ve made it work a little better,” said Feger, joining Sheppard to give Illinois two top-five finishers for the first time in the Carl Short-promoted event. “But it was so on-the-edge up there ... any little bobble could’ve ended your night."