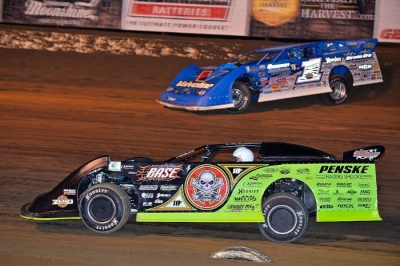 Jumping to the cushion for a lap-40 restart, Sheppard made a fifth-to-first charge over a four-lap stretch and went on to become the youngest winner in the history of the Carl Short-promoted event.

“Mark kind of told me before this deal started, he said 'You’ve gotta be patient but you’ve gotta make the right moves when they’re needed to be made.' I guess I made the right move when it was needed,” Sheppard said.

Champagne doused Sheppard and the Rocket Chassis house car team in victory lane as crew members celebrated its first DTWC victory — along with the 53rd birthday of Mark Richards.

“He does as good a job as anybody we could’ve had that in that car,” Richards said of Sheppard, who spent most of the 2012 season in the car while Josh Richards chased his NASCAR dreams. “He did a great job.”

Sheppard took the checkers 10 lengths ahead of Steve Francis of Ashland, Ky., who rallied from 15th and outdueled fellow Kentuckian Jackie Boggs of Grayson, a track favorite, the last half of the race. Jason Feger of Bloomington, Ill., rallied from 14th to finish fourth, giving Illinois two drivers in the DTWC’s top five for the first time.

Scott Bloomquist of Mooresburg, Tenn., wasn’t around at the finish after a flat left-rear tire knocked him from contention. After leading 42 laps — sometimes by as much as a straightaway — but then dropping to third behind Sheppard and Boggs, Bloomquist slowed and headed pitside with a vibration that signaled a flat tire. His crew changed his right-rear tire, but it turned out his left-rear went flat five laps later.

Sheppard stayed calm and cool in victory lane while celebrating a victory that made 1997 race winner Marshall Green of Dalton, Ga., at 24, the second youngest Dirt Track World Champion.

“It’s amazing, you know. I don’t think it’s still set in yet,” Sheppard said. “It’s going to be one that we’re thriving on for a few weeks, I’d say.”

He was grateful to Richards and the potent Rocket team that includes Steve Baker, Matt Barnes, Cody Duncan and others for the opportunity to field the blue No. 1, one of Dirt Late Model racing’s most recognizable cars.

“They’ve taught me so much. I wouldn’t be where I’m at if it wasn’t for them guys, and obviously my dad and my grandpa. They made me be able to have a racing career,” Sheppard said. “They let me come on board last year and we went and did the Summernationals. They taught me so much and I really appreciate them.”

Sheppard, who started seventh in the 100-lapper, was running a relatively quiet fifth on a lap-40 restart when he jumped to the outside, roaring around Boggs, Billy Moyer and polesitter Steve Shaver in one fell swoop before setting his sights on Bloomquist.

“I just saw a little bit of an opportunity there and took it, and it stuck,” said Sheppard, who went from fifth to second on lap 41, then overtook Bloomquist two laps later. “I knew I was good on the cushion from last night, in the heat race and stuff. You never know. But we went up there and it stuck and it was amazing.”

For the rest of the distance, Sheppard turned back a few challenges on the restarts and just maintained a steady, winning pace in the low groove for his first career victory in a 100-lap event.

“I felt like I was messing up there once in a while, but I guess it was so little that you couldn’t tell,” Sheppard said.

Francis got the better of Boggs on a lap-79 restart to regain the second spot, but he never found an opening with Sheppard.

“I was probably a little too conservative on (my tires) early in the race. I probably should’ve went out there a little harder, and maybe if I could’ve gotten in front of Brandon, I could’ve got to where he did faster,” Francis said.

“Congratulations to him and Mark and all the guys. He ran a excellent race and didn’t make no mistakes. They came here, they set fast time and they won the race. We started 15th and got to second, so we can’t complain either.”

Boggs sustained nosepiece damage in the first part of the race that hampered his steering, making restarts particularly difficult. Boggs made an outside-inside challenge on Sheppard on a lap-64 restart that was as close as anyone got, but the final caution with 21 laps remaining dimmed any remaining hopes.

“On lap 79, we were coming ... we were catching (Sheppard) and I could reel him in a little bit and the car was starting to come in and picking up sidebite getting into the corner ... all of the sudden the caution come out, and that killed us,” Boggs said.

The feature was slowed by seven cautions, none for serious incidents. Jared Landers spun atop turn two on the 21st lap and Davey Johnson slowed on lap 40.

Bloomquist slowed for a pair of mid-race cautions, the second time for a flat tire, while R.J. Conley slowed to collect Will Vaught on lap 53. A slowing Jonathan Davenport drew a lap-64 yellow and a caution for debris appeared on lap 79.

Notes: Sheppard’s winning Rocket Chassis is powered by a Roush Yates engine and sponsored by Seubert Calf Ranches, Valvoline, Ernie D’s Enterprises, Ace Metal Works, Petroff Towing, Sunoco and Integra Shocks. ... Josh Richards had planned weeks earlier to skip the weekend while vacationing with his fiancee. ... Sheppard spend the last two weeks at Rocket’s Shinnston, W.Va., shops. ... Half of 28 starters completed 100 laps and 15 were running at the finish. ... Polesitter Steve Shaver of Vienna, W.Va., ran in the top five the first half of the race before fading, and he gave up the eighth spot to pit on lap 64; he finished 10th, one spot better than Longhorn Chassis teammate and fellow heat winner Earl Pearson Jr. of Jacksonville, Fla. ... Seven different chassis finished in the top seven spots. ... Rocket led the way with nine feature starters, but only Sheppard finished better than 13th among those nine drivers. ... Kentucky had two drivers finishing among DTWC's top three for the first time since 2003 when Darrell Lanigan and Steve Francis finished first and third at Bluegrass Speedway in Bardstown, Ky. ... The DTWC will return to Portsmouth for the 34th edition in 2014, the series announced.