B-Shepp aims to be successful substitute 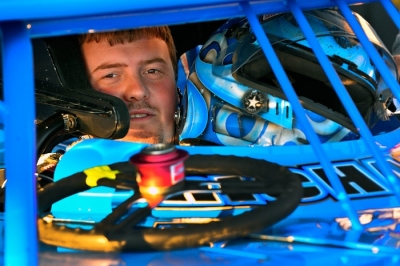 And while the 20-year-old New Berlin, Ill., driver returned to his own equipment this season with Richards returning to dirt, he’s making a reappearance with the Mark Richards-led team at the 33rd annual Red Buck Dirt Track World Championship. | Complete DTWC coverage

Friday’s preliminaries were a mixed bag for Sheppard and one of Dirt Late Model racing’s best teams. He was a nearly a half-second quicker than all but two other competitors in topping the 79-car field in time trials, but he stayed with the high groove too long in the first heat race and fell victim to a last-lap pass by Earl Pearson Jr.

Sheppard is scheduled to line up seventh on Saturday evening for the $50,000-to-win finale on the Lucas Oil Late Model Dirt Series, and he’s figuring that’s close enough to the front for a reasonable shot at his career-richest victory.

Sheppard wishes he’d have been in the second heat race, which might’ve given him a better indication of how the racing grooves would develop — especially that the lower groove was clearly improving.

“It was my fault. We had a good car. I feel like we should’ve won the heat race,” he said. “They don’t really let your spotter stand close enough to the track to be able to see anybody. I just kind of stuck with my gameplan and stayed around the top. I should’ve moved down ... but you live and you learn, you know?”

Sheppard, who swept the UMP DIRTCar Summernationals touring title along with UMP DIRTcar’s weekly crown in 2013, remained confident despite the heat race loss.

“We’re real happy with the way it’s going so far. I think we’ll start seventh. So, that’s still better than being in the consy tomorrow night,” he said. “I mean, our car’s been really good, and hopefully we can make something happen. I think I’d rather start seventh than on the front row, because when you start on the front row, there’s only one other way you can go if you don’t win. So we’ll take it.”

Josh Richards hasn’t missed a beat in the Rocket house car this season as he closes in on his third World of Outlaws Late Model Series championship. But with him going on vacation with his fiancee, it was natural for the team to give Sheppard a ring.

“I really appreciate these guys letting me come out here and do this. A couple of months ago, they called me and said Josh was taking the weekend off and wanted to know if I wanted to come. How could I turn down something like this?” Sheppard said. “It’s nice, especially with as good of equipment they have, and as good of a team this is. It’s obviously one of the best teams that’s out here right now, so it’s a real privilege for me.”

And while he found success in the car last season, including a World of Outlaws victory, he feels like he’s returning to the seat of the familiar blue No. 1 car a better driver.

“I feel like I’ve improved myself as a driver this year. I mean, I kind of feel myself improving every year, but this year, I wish we could’ve got to do it again this year — the Summernationals or whatever in this car.

“Obviously we had a great year in my own stuff, and we’ve pretty much got the same equipment, but this team, there’s just something about it. They’re so perfect with everything they do, I wish I could’ve done it one more year and see what we would’ve done this year. ... Oh well, I’m glad to be back here running now.”