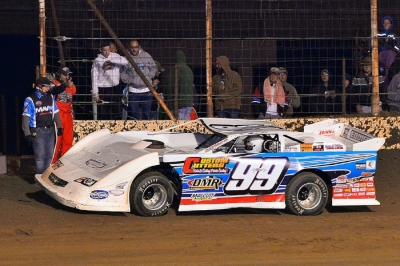 That is until his No. 99 was in the middle of a pileup during the fourth heat of the 33rd annual Red Buck DTWC, spoiling his night and assuring him of a difficult path through a Saturday consolation race to even make the lineup for the $50,000-to-win finale on the Lucas Oil Late Model Dirt Series.

The sixth-starting Moran was up to third and trying to chase down Jackie Boggs and John Blankenship when outside front-row starter Mike Marlar of Winfield, Tenn., made contact entering turn one and spun Moran around, triggering a multicar accident that also included Bobby Pierce and Zack Dohm.

Marlar, who recently made the mutual decision to split from Douglasville, Ga.-based car owner Norman Bryson, who sold out the team’s equipment, was piloting the No. 1w Rocket Chassis normally driven by Dillon Wood and said he was struggling with the car’s brakes.

“I was having problems before the restart, but I had the whole racetrack. So if I pushed a little bit, it was OK. But if you get in that pack, two or three wide, and you go in there and something goes wrong, there ain’t enough room for that to happen,” Marlar said.

“I just feel bad for Donnie. Heck, he was doing his part, and I just run up and spun him out. I’ve got a lot of respect for the guy and never wanted to go in there and hit him like that ... but I hit him and crashed him, and hopefully he can recover from it and get in the (feature), because I feel like I definitely took him out of it there. I hate when I do dumb stuff like that.”

Moran, who hasn’t posted a top-five finish in the DTWC since 1999, ended up finishing seventh in the heat with a banged-up MasterSbilt Race Car.

“We’ll get it fixed and be back tomorrow,” he said.

There’s just two drivers fielding Longhorn Chassis in the Portsmouth pits, but both are sitting pretty after winning Friday heat races at the crown jewel event. Earl Pearson Jr. of Jacksonville, Fla., is scheduled to start sixth in Saturday’s 100-lapper while Steve Shaver of Vienna, W.Va., will line up in the pole position.

The chassis, an in-house product of Pearson’s Bobby Labonte Racing team, will get a chance to shine on a big stage.

Shaver, who will try to become the first West Virginia driver to win a race that’s been held in the Mountain State more than anywhere else, hopes his Longhorn is up to the challenge.

“All the guys have worked really hard, and we’ve been sharing information all along throughout the season, and it’s starting to pay off,” Shaver said. “We’re getting some good notes and hopefully we can put all that stuff together tomorrow and finish 1-2. I’d rather be one and him be two, but I’m sure (Pearson is) saying the opposite.”

Running out of steam

“I knew I had to get in front of him to at least have a chance anyway,” said Carrier, who flung his car into the high groove to edge ahead of Bloomquist.

But Bloomquist knew Carrier had worked his car hard in the early laps. “He was definitely using his tires up and pushing it pretty hard,” Bloomquist said.

When the frontrunners reached traffic in the closing laps, Carrier lost momentum and Bloomquist, keeping his car straight and smooth in the low groove, was able to slip by the lead the last two of 20 laps.

“I think I used my tires up a little early in the race. Maybe I used 'em up those first three laps when me and him were running so hard,” said Carrier, who had considered a hard tire choice. But then again, he said, if the harder tire didn’t fire early, “you’re going to be a sitting duck for about half the race, and when them guys get out there, you ain’t going to run 'em down.”

Carrier’s car simply wasn’t running as well late in the race as it did early in the 20-lapper.

“I kinda had to go in the corner and keep (my tires) in the brown to get a good drive off. Later in the race, when my right rear, I think it gave up, because it was blistered when we came in,” Carrier said. “When I got to them lapped cars, I couldn’t maneuver the way I needed to maneuver down in that black. I was just done using my stuff up and he just got by me.”