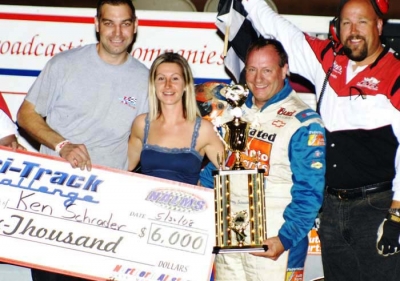 Terry English of nearby Benton, Ky., started fourth and took the early lead with Feger and Brian Shirley giving chase. Schrader quickly improved from sixth to fourth in the early going, and he was elevated to third when a flat tire knocked English out of contention.

Feger inherited the lead and began building an advantage on Shirley before working through lapped traffic by the ninth lap. With Feger still out front, the traffic helped Schrader close in on Shirley, and he began a tight battle on the 12th lap before finally grabbing the second spot on the 20th lap.

After cautions for Kyle Logue and Ryan Dauber, Schrader turned up the heat on Feger while behind them, Shirley lost the handle on the 26th lap and hit the wall to draw the fifth caution.

Schrader continued his charge on the restart, finally going ahead with two laps remaining. But Feger made a crossover move to regain the lead at the stripe, and with one to got, Feger got into the wall exiting turn two, then rode the wall in turn three as Schrader went back ahead and went on to take the checkered flag.

Notes: Tait Davenport's last-lap pass of Tanner English gave him a victory in Paducah's UMP Crate feature. ... The Tri-Track Challenge continues Saturday and Sunday with $6,000-to-win events at I-55 Raceway in Pevely, Mo., and Macon (Ill.) Speedway. If Schrader can sweep the weekend, he'll be in line for a $10,000 bonus in addition to $18,000 in purse winnings. However, he's due to race in Dover, Del., in Sunday's NASCAR Sprint Cup event.