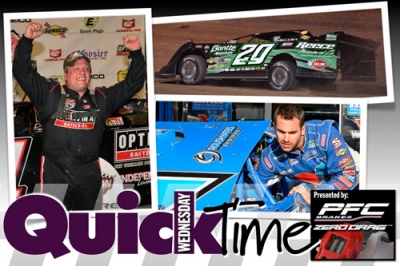 National: Competing in the Pittsburgher for the first time in 10 years, Scott Bloomquist of Mooresburg, Tenn., dominated the 100-lap NDRL-sanctioned finale for a $25,000 payday and his fourth victory in Pittsburgh's Pennsylvania Motor Speedway’s revitalized event.

Weekly: While he’s leading the points on the Southern All Star tour, Riley Hickman of Ooltewah, Tenn., stayed closed to home Oct. 11-12 to sweep Limited Late Model races at Boyd’s Speedway in Ringgold, Ga., and Cleveland (Tenn.) Speedway. He earned $2,500 for his Cleveland victory over Shawn Chastain.

The cream rises to the top in the long-distance races when the big money is on the line. DirtonDirt.com staffer Andy Savary put together a breakdown of statistics among the season’s 22 Super Late Model races in 2013 of races 75 laps or longer paying at least $15,000-to-win:

But recent history isn’t on his side. The Carl Short-promoted event has had just one driver — Shannon Babb of Moweaqua, Ill. — win more than once over the last 19 runnings of the $50,000-to-win race.

The stretch of 10 years without a repeat winner is longer than any other streak among Dirt Late Model racing's crown jewel events (Iowa's Lucas Oil Late Model Knoxville Nationals and Batesville Motor Speedway’s Comp Cams Topless 100 in Arkansas have each gone seven seasons, including this year, without repeat winners).

The DTWC’s recent history is opposite the earlier years of the event, which was hosted by the legendary Pennsboro (W.Va.) Speedway for 17 years before being shuffled among six other tracks in Kentucky, Ohio and West Virginia.

Over the first 18 events, four Hall of Fame drivers — Freddy Smith, Ronnie Johnson, Jack Boggs and Billy Moyer — combined to win 11 races, leaving scraps for everyone else. After four different drivers won the first four races from 1981-84, the DTWC never went more than three years without a repeat winner until — you guessed it — Shannon Babb’s second victory in 2006. Babb’s first victory came in 2002.

Backstretch: Tweets of the week

Tyler Beichner ‏@tyler_beichner: I've just been informed that the fastest lap of the race was Bloomquist's last lap. I would say he still had a little saved up for the end.

Shawn ‏@Rounsie: @racecarman55 @The_NDRL pittsburgher was one of the best ran shows I have been to in a long time ran smooth and fast no BS at all.

Nick Lohrmann ‏@NickLohrmann: “I'd like to check out please”; “Name, sir?”; “Bloomquist” #Pittsburgher100

• Every team has one crew member known only by a nickname.

• Drivers wearing their own T-shirts need to find another shirt.

• If you’re starting on the pole and you’re asked to carry an in-car camera, they’re expecting you to wreck.

• Track surfaces that pull the shoes off your feet are sure to dazzle.

Oct. 20, 1984: In the Southern All Star Dirt Racing Series season finale at Talladega Short Track, Jerry Inmon of Bruce, Miss., put a cherry on top of his tour title with a victory at the Eastaboga, Ala., track. The victory was Inmon’s series-best fourth of the season.

Oct. 18, 2011: Two-time Mississippi State Championship Challenge champion David Breazeale of Four Corners, Miss., announced he was scaling back to part-time racing after 15 seasons to focus on his logging business.

• Home-state drivers will be shut out of the top five in the 100-lapper.

• Three house car drivers will finish among the top 10.

• Swartz Race Cars will put three chassis into the main event for the first time at the DTWC.

• A home-state driver will win the non-qualifiers’ race.