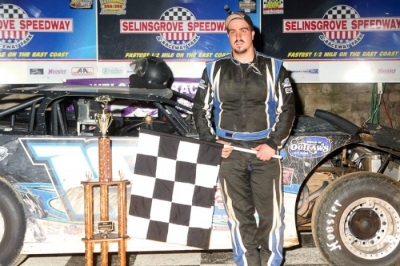 SELINSGROVE, Pa. (Oct. 12) — Matt Cochran earned a career-biggest victory Saturday at Selinsgrove Speedway’s 30-lap Fall Classic as the 20-year-old from Williamsport, Pa., topped a thrilling five-car battle in the final laps of the season finale at the half-mile oval. | Slideshow

The seventh-starting Cochran’s second victory of the year and the fourth of his career at Selinsgrove paid $5,000 as he took the checkers in the unsanctioned event over track champion Jeff Rine of Danville, Pa., who rallied after an early pit stop. Jason Covert of York Haven, Pa., was third followed by Dan Stone of Thompson, Pa., and hometown driver Dylan Yoder.

Polesitter Scott Haus powered into the lead at the outset followed closely by second-row starters Covert and Stone The event’s first caution flag unfurled on lap four when Pancho Lawler stopped his No. 93 in turn four.

During the caution flag period, Haus took his smoke-wafting car to the pits, and the sixth-starting Rine used the break to duck into the pits before rejoining the field.

Covert inherited the lead for the lap five restart and quickly stretched his lead while Stone raced with front-row starter Chad Hollenbeck, Yoder and Cochran among the top five.

On the 13th circuit, Hollenbeck slowed with a flat tire, and another restart on lap 17 saw Stone penalized for jumping a previous start, moving Cochran up to second behind Covert.

The second half of the race was an all-out war on wheels for the top five among Covert, Cochran, Stone, Yoder and Rine, who charged back to the front.

Cochran made the winning pass using the inside lane through turns one and two on the 27th lap. Rine showed a final burst of speed by powering into the runner-up position on the final lap, but he finished two seconds back.