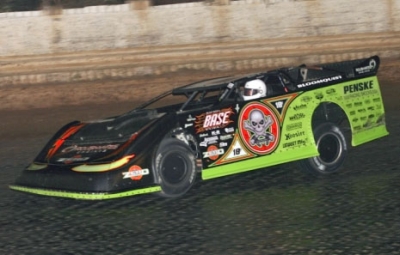 IMPERIAL, Pa. (Oct. 12) — Hall of Famer Scott Bloomquist of Mooresburg, Tenn., became the second four-time winner of the Pittsburgher 100 on Saturday at Pittsburgh's Pennsylvania Motor Speedway, dominating virtually all the way at the half-mile oval for a $25,000 payday. | Slideshow | Video

The polesitting Bloomquist, matching Davey Johnson’s victory total in the event in winning the race for the first time since 1995, slipped under fellow front-row starter Billy Moyer amid traffic on the 12th lap and wasn’t seriously challenged the rest of the way in the National Dirt Racing League finale.

“Billy jumped out and I noticed I could run lower on the racetrack and gained a little ground. I just felt like the car was so maneuverable. It was fortunate we could operate low like that and get in some clean air. Air’s big at this place,” said Bloomquist, who credited recent testing and new Penske shocks for his performance. “We got down and I knew when we started gaining on him ... and we got to traffic and I knew what line was going to stick with after we got by him.”

Bloomquist had clear sailing the rest of the way, with a modest threat from Moyer coming in the final 10 laps before Bloomquist put a lap on Jimmy Mars and kept a comfortable margin over the champion of the first-year NDRL.

“It’s amazing when you get in the clear how much more traction you’ve got, how much tighter your car is going into the corner,” Bloomquist said. “It really is something that we never used to think about that much, but it’s very important now. It seems like everybody’s getting faster and the faster you go the more important it is.”

Moyer settled for second but collected $20,000 for the title on the John Kennedy-founded organization, which ran five races in 2013. Kent Robinson of Bloomington, Ind., rallied from 16th to finish third ahead of 12th-starting Eddie Carrier Jr. of Salt Rock, W.Va., and 21st-starting Rick Eckert of York, Pa., the top-finishing home-state driver.

Fast qualifier Jackie Boggs of Grayson, Ky., never ran up front and retired before the halfway point, while Jason Feger of Bloomington, Ill., the $10,000 winner in Friday’s tuneup, ran second in the first half of the race before slipping back on a lap-72 restart and retiring in the final laps.

Moyer led the first 11 laps, but when Bloomquist took over as the frontrunners hit their first serious batch of lapped traffic, he knew he’d have his hands full.

“He did a good job. He’s no slouch. He did everything. I thought I had a shot a time or two,” Moyer said. “The track, it’s a blast to run on, a heckuva facility here. We just feel like maybe our tires maybe weren’t quite right on what we did getting 'em ready for the race, just grooving and siping and stuff. I don’t know. It’d feel real good a couple of laps, and it’d go back away. There at one time we was kinda of inching up on him, but getting up there and passing him is two different things.”

“I thank my crew for everything they’ve done to win this championship,” Moyer said. “That’s what the main goal was.”

Robinson ralled into third on the lap-72 restart and scored one of his best big-money race finishes.

“We needed this run, the whole team. The car was awesome and I just had a lot of fun,” Robinson said. “I got to third and I was just waiting for the checkered. I thought I might be able to get Billy, but to run third to Billy and Scott, how can I say anything bad?”

Notes: Bloomquist’s self-designed chassis has a Roush Yates powerplant and sponsorship from Base Race Fuels and Penske Shocks. ... Bloomquist's previous Pittsburgher triumphs came in 1989, 1993 and 1995; he returned to the event after a 10-year absence. ... The race was co-sanctioned by NDRL's ULMS Racing Series, a regional tour also promoted by John Kennedy. ... Davey Johnson, the race’s other four-time winner, was among the early retirees and finished 24th; only 10 drivers completed 100 laps. ... Eleven former race winners competed the silver anniversary event, including last year’s winner Gregg Satterlee, who finished sixth. ... Besides the lap-43 caution for Boggs, yellows also appeared for John Garvin Jr. and Dale McDowell, who ran among the top five early but retired to finish 20th. ... The feature went green at 9:45 p.m. ... Ryan Montgomery completed the weekend sweep of RUSH Crate Late Model action; he earned $3,000 and won by a near half-track margin.