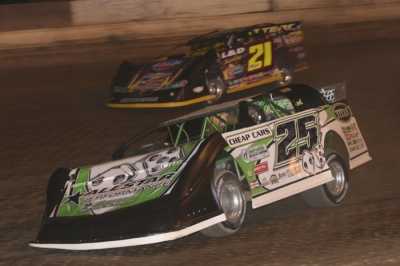 Jason Feger (25) turns back Billy Moyer on his way to victory. (Todd Battin)

Feger earned $10,000 for his first career victory on the first-year NDRL tour in making his first-ever visit to the half-mile oval. He dominated the 50-lap race with a flag-to-flag performance in the first of two weekend events at PPMS that wrap up the season for the NDRL tour. | Slideshow

“We changed a little bit of stuff there right before the feature and I think it paid off,” said Feger, the 35-year-old Midwest racer who has competed in more national events this season. “I was trying to be smart and not make any mistakes and hopefully it’d go our way, and it did.”

Feger turned back series points leader Billy Moyer of Batesville, Ark., on the race’s only two restarts and later held more than a straightaway advantage in leading Josh Richards of Shinnston, W.Va., and Dale McDowell of Chickamauga, Ga., to the finish. Moyer slid back to fourth with Eddie Carrier Jr. of Salt Rock, W.Va., rounding out the top five.

Feger’s second $10,000 victory of the season helped turn around a recent run of bad luck that saw him fall from contention in a number of major events.

“We’ve been really fast the past month, we just haven’t been able to finish the race,” said Feger, who earlier this season won a Lucas Oil Series race at Hamilton County Speedway in Webster City, Iowa.” It feels good to finally get the payoff, especially as good as Josh has been running lately, and Billy too. To be able to outrun those guys, especially on a track like this. This hasn’t really been my kinda deal, but we’ve got to do it quite a bit this year and we’ve gotten our program a long way on tracks like this. It feels pretty good to do that.”

“We’ve got a little bit better,” said Richards, who won the Pittsburgher in 2007 when the event was sanctioned by the World of Outlaws. “We were a little off on tires. We kinda had ourselves screwed up a little bit. It was what I ran last year, but the track was a little different tonight.

“Part of the reason why is we were setting up for tomorrow and went with a harder tire than most of the guys. We’ll just do what we can and see if we can be there at the end tomorrow night.”

Moyer, who won the tour’s previous event Sept. 2 at Roaring Knob Motorsports Complex in Markleysburg, Pa., ran second for much of Friday’s race before Richards and McDowell shuffled him back to fourth during the final five laps. Carrier was well back in fifth.