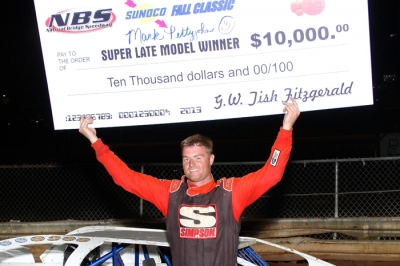 Mark Pettyjohn, the 2013 Three State Flyers champion, benefitted from a caution with two laps remaining to pull to the back bumper of his brother’s machine for a three-lap shootout. Both drivers got solid restarts, but it was Mark Pettyjohn nosing ahead of his brother at the white flag. He pulled ahead through the final lap to claim his fifth special-event victory of the season.

Kenny Pettyjohn and Eckert brought the thundering field to the green flag with Pettyjohn jumping out to the early lead. Eckert stayed within striking distance as the race settled into a green-flag run.

While Pettyjohn kept his momentum up racing around the top of the racing surface, Eckert used the bottom groove to close the cap as the leaders quickly reached lapped traffic.

Eckert pulled alongside Pettyjohn and briefly took the lead, but Pettyjohn came roaring back on the high side and retook the lead just a few laps later.

While Kenny Pettyjohn and Eckert were holding down the top two positions, former race winner Steve Shaver and Mark Pettyjohn were working their way to the front while Roberson, Greg Satterlee and Jason Covert all also wanted part of the action.

During their run toward the front, Mark Pettyjohn and Shaver were made contact, nearly causing both drivers to lose control. Both cars lost a considerable amount of track position before correcting their machines and never bringing out a caution.

The contact between the Pettyjohn and Shaver appeared to cost both drivers a shot at the victory. However, during the second half of the race the caution flags fell just right Mark Pettyjohn, who was picking off driver after driver as the laps were running out. He seemed to be running out of time when the final caution came out with just three laps remaining.

The final caution set up the brotherly shootout between the two Delaware drivers. Kenny Pettyjohn nailed the final restart but Mark Pettyjohn was glued to his back bumper. Mark Pettyjohn pulled alongside his brother with two laps remaining with the two racing side by side before Mark Pettyjohn nosed ahead as the white flag was displayed before pulling ahead for the victory during the final circuit.