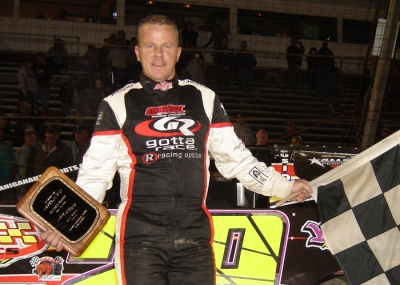 DELMAR, Del. (May 29) — Darrell Lanigan has taken a liking to Delaware International Speedway. The Union, Ky., standout scored his second win in four career World of Outlaws Late Model Series starts at the half-mile oval on Thursday night, rolling to a flag-to-flag victory in the caution-free First State 50 that moved him into a tie for the tour’s points lead. | WoO notebook

“I’d say this is a place I like,” Lanigan quipped after holding off Shannon Babb of Moweaqua, Ill., to record his first WoO LMS triumph of the season. “We like big tracks like this — and we do run good here.”

Lanigan, who turns 38 on June 3, surged forward from his starting spot on the outside of the front row when the race began to immediately grab the lead from polesitter Ricky Elliott of Seaford, Del. He proceeded to steer his gottarace.com Rocket car flawlessly around promoter Charlie Cathell’s well-manicured track, capturing the tour’s first non-stop feature of 2008 in under 18 minutes.

Babb, 34, made several runs at Lanigan during the final circuits, but he settled for a second-place finish in his Traeger Grills Rocket car. He raced with his car owner, NASCAR Sprint Cup star Clint Bowyer, looking on from the pit area after riding down from nearby Dover (Del.) International Speedway.

Defending series champion Steve Francis of Ashland, Ky., who started sixth, finished third in Dale Beitler’s Reliable Painting Rocket. Elliott’s bid to give his legion of local fans a celebration fell short with a fourth-place finish in the Seaside Builders Rocket, and 2006 WoO LMS champ Tim McCreadie of Watertown, N.Y., was fifth after starting third in the Sweeteners Plus Rocket.

Lanigan’s triumph, worth $10,150, continued his recent hot streak on the WoO LMS. He’s registered four consecutive top-five finishes and now is atop the points standings for the first time in his five years as a tour regular, albeit tied with Francis.