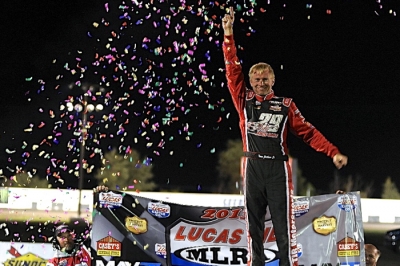 Jackson of Lebanon, Mo., finished seventh in the night’s first feature, which was postponed from Friday night, and later used a fourth-place finish in the night’s regularly scheduled season finale to claim the title. | Slideshow

Jackson, who wrapped up his first MARS DIRTcar Series championship on Sept. 21, matched Terry Phillips of Springfield, Mo., in becoming just the second driver with MLRA and MARS titles on his career resume and became the first driver to top both tour’s points chases in the same season.

After winning his heat race Friday night to earn the outside pole of the weekend’s opening feature, Asplin of Birch Tree, Mo., finished what he started by leading all 35 laps of the conclusion of the event Saturday night, earning $3,000 for the first Super Late Model victory of his career.

Simpson of Oxford, Iowa, kicked off his night with a runner-up finish in the first feature with Jim Sherech of St. Charles, Mo., Brad Looney of Republic, Mo., and Will Vaught of Crane, Mo., rounding out the top five.

The night got even better for Simpson in the second feature as he overtook Phillips with four laps remaining to earn $5,000 for his second MLRA victory of the season. Phillips, who led the first 46 laps from the pole, settled for second at the finish with Vaught, Jackson and Jesse Stovall of Galena, Mo., filling the remainder of the top five.