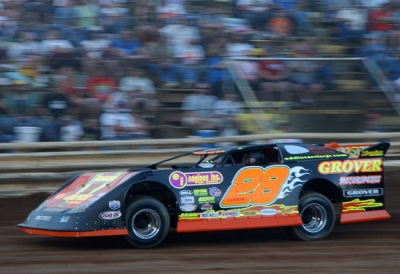 MIDDLEBOURNE, W.Va. (Sept. 1) — A transplanted West Virginian feels a little more at home in the Mountain State after his victory in the 39th annual Hillbilly 100 at Tyler County Speedway.

"You know I've raced a long time and I've worked hard at it," an emotional Carrier said in victory lane. "I may be from Kentucky, but I'm from West Virginia now, and it sure feels good to win this race.

"My dad kept showing me under caution that someone was right behind me, so I just wanted to run the same groove on the track and hit my marks and when they came on the RaceCeiver and said we had seven laps to go, I just hammered it down and I wasn't going to give up the lead easily."

The 36-year-old Carrier, who moved four years ago to drive for Grover, was grateful to his car owner.

"I really want to thank Carl Grover for giving me a chance to drive his car and I can't thank my crew enough, my dad, Victor and my wife, Jamie, she puts up with a lot of stuff, but she has always supported me in racing and I appreciate that. It's an honor to win such a prestigious race as the Hillbilly 100 because of all the great names that have won this race and the tradition the race holds."

The oldest Dirt Late Model race in the country probably felt like more than 100 laps to Carrier as he had to hold off challenges from Doug Horton over the last half of the race. Horton blew a tire on the final lap to allow 23rd-starting Scott James to nip him at the finish line. Earl Pearson Jr. finished fourth to maintain his Lucas Oil points lead with two-time Hillbilly 100 winner Freddy Smith finishing fifth.

The 2007 Tyler County champion Paul Wilmoth Jr. and Carrier drew the front-row starting spots among the six heat race winners and Carrier bolted to the lead at the start. Tim Dohm spun early and Terry English was an early dropout in the first few laps.

Carrier stayed in front after an early restart while Wilmoth and Steve Casebolt provided pressure. Carrier started to pick up traffic by the 10th circuit as Wilmoth and Casebolt closed right on the rear of Carrier as the trio raced through traffic.

Things got interesting on the 14th circuit with contact between Wilmoth and Casebolt entering turn one as both cars came to a halt. This jumbled up the top five as Pearson, Steve Shaver, Steve Weigle and Horton took up the chase of Carrier.

After 10 more laps, a multicar pileup ensued on lap 24 and Shaver moved into second on the restart while Horton moved up to fourth a few laps later.

But Carrier opened up a good lead over Shaver and Pearson while Horton stayed on the move and dropped Pearson to fourth on lap 34. Keith Barbara slowed with a flat tire on lap 41 to bring out caution No. five. Horton took advantage on the restart to take second from Shaver as a long stretch of green-flag racing developed.

Horton pulled up on Carrier's rear deck at the halfway mark while James, who started via a series provisionals, was up to fourth behind Pearson. Joining James in his march to the front was Dohm and Casebolt, both back into the top 10.

Mark Banal slowed to bring out a lap-70 caution and Horton resumed his challenges of Carrier on the restart. Weigle slowed on lap 80 with a flat tire and that once again set up a nose-to-tail restart with Carrier still on top. Horton continued to hound Carrier but couldn't make a move.

A final caution waved on lap 97 for Shaver and Carrier was able to edge away by a few lengths in the waning laps. Horton and James were battling as the white flag appeared and while Carrier beat them to the finish line, Horton blew a tire exiting turn four and James slipped underneath him to take the second spot. Horton limped across the line third.

Carrier's Carl Grover Motorsports-owned Rocket Chassis has a Grover powerplant and sponsorship from Engines Inc., Railway Equipment Sales, Blue Ridge Machinery along with Hess, Stewart and Campbell. ... Carrier has two career Lucas Oil victories. His first came in 2004 at K-C Raceway near Chillicothe, Ohio. ... Carrier is the 18th different winner in 32 series races this season. ... Rick Williams of Beckley, W.Va., set fast time, but he couldn't overcome a four-car inversion in his heat race. He also failed to transfer to the feature through his consolation race. ... Tyler County was hosting its 10th Hillbilly 100. The race originated at the now-shuttered Pennsboro (W.Va.) Speedway. ... Tyler County set a track record with 85 Super Late Models entering the event. ... During the entire Hillbilly 100 weekend, 294 race cars participated. ... Paul Wilmoth Jr. won the Hillbilly 50 for steel-block Late Models and earned a starting spot in the 100-lapper (correction from earlier report that said Sonny Conley won).