Lanigan, Richards don't give an inch at Knoxville 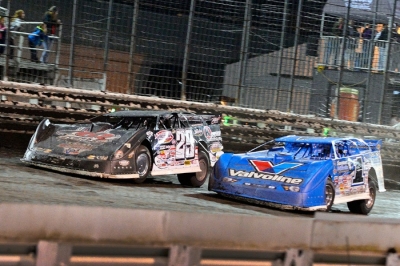 KNOXVILLE, Iowa (Sept. 28) — One night after a scrape between Darrell Lanigan and Josh Richards that required an animated post-race discussion about a racing incident, the two found themselves racing in close quarters again Saturday at Knoxville Raceway in the $40,000-to-win finale of the 10th annual Lucas Oil Late Model Knoxville Nationals. | Complete Knoxville coverage

Going wheel-to-wheel is nothing unusual for the World of Outlaws Late Model Series series regulars who, even when dropping in on the Lucas Oil Late Model Dirt Series for Knoxville’s three-race weekend, found themselves going at it just like another weekend on their own tour.

While Friday ended with Richards in victory lane and Lanigan rubbed wrong after a contact-induced spin, Lanigan was the one smiling Saturday and holding the big paycheck after a lead-swapping duel that didn’t require any apologies or explanations.

“I think we both go out there to win the race, and you might rub a little bit. I don’t go out there with intentions of wrecking Josh or nothing like that, but I will race him 100 percent.”

Richards, runner-up in the Knoxville 100-lapper after leading three times for 29 laps, wasn’t surprised that he was battling his long-time traveling mate. Richards pilots his father Mark’s Rocket Chassis house car while Lanigan is a loyal and accomplished customer of the Shinnston, W.Va., chassis builder.

“We raced hard and I knew when I saw him, he was going to give it all he had, and I was going give it all I had,” Richards said. “And we’ve always raced hard and (raced) clean together, you know. We’ve always been able to do that, and sometimes when you’re pushing that hard, stuff happens, and it’s never intentional. But usually it’s for the win or trying to battle up front.”

And so it was Saturday when on a few occasions they were close enough for controversial contact, but it never developed as they held the top two spots most of the race.

“We both race hard. We were racing for the win. We’re both going to race each other as hard as we can,” Lanigan said. “We’re going to rub and sometimes something’s going to happen and somebody’s going to be mad. Last night I was mad. But we get over it. I don’t think we, either one of us, go out each night to wreck each other.”