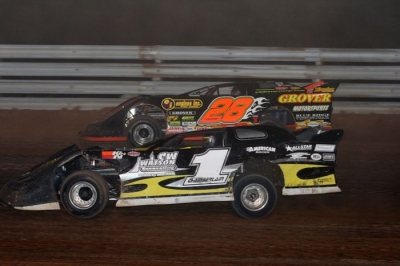 ST. CLAIRSVILLE, Ohio (May 25) — Eddie Carrier Jr. of Salt Rock, W.Va., led the final 12 laps of the 50-lap Beecher Eaton Memorial at Cannonball Motor Speedway to grab his second consecutive Independent Racing Series victory and third in the last four races. Carrier, who also won $5,000 a night earlier at Muskingum County Speedway in Zanesville, Ohio, was the fifth and final leader at Cannonball in a race that featured nine lead changes. | Slideshow

Polesitter and IRS points leader Tim Dohm of Cross Lanes, W.Va., and Mike Knight of Ripley, N.Y., swapped the lead four times through the first 16 laps, but Robbie Blair of Titusville, Pa., took command on the 17th lap. Blair gave up the point to seventh-starting Duane Chamberlain of Richmond, Ind., briefly on laps 22-23 before going back ahead on lap 24. Chamberlain went back out front on lap 33, but Carrier was stalking the frontrunners. Carrier slipped around Blair and Chamberlain to lead the 39th lap and stayed out front the rest of the way. Chamberlain finished second followed by Dohm, front-row starter Donnie Moran and Blair in a race slowed by nine cautions, none for serious incidents.

Notes: Carrier’s Carl Grover Motorsports Rocket Chassis has a Grover Racing Engine and sponsorship from Hoosier Racing Tire and Engines Inc. ... Among early cautions were spins by Andy Bond and Devin Friese. ... Jared Hawkins slowed with a flat on lap 16; shortly after, Hawkins was involved in a spin with Gary Knollinger. ... Duane Chamberlain's second-place finish was his best-ever on the series. ... IRS competitors stay in Ohio for May 30-31 races at Skyline Speedway in Stewart and Sharon Speedway in Hartford. Both races pay $5,000 to the winner.