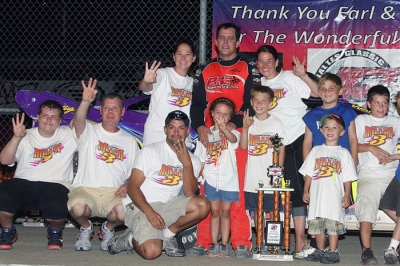 Miller, the current Eldora points leader who scored a pair of preliminary features at the Dirt Late Model Dream, roared forward from his seventh starting spot in Sunday’s main event to take the lead on lap seven. He led the remaining distance in his Rick Delong-owned machine on his way to a sweep of the ALMS tour’s doubleheader weekend. Miller, who also won Saturday night’s ALMS event at Oakshade Raceway in Wauseon, Ohio, pushed his total weekend earnings to $5,000.

“Rick (Delong) and guys had this car dialed in tonight; it could go anywhere I put it,” said Miller, who earned the 25th ALMS victory of his career. “I feel great going into next week’s World 100.”

Jon Henry of Ada, Ohio, advanced from 12th to claim runner-up honors while Kent Robinson of Bloomington, Ind., mounted a charge from eighth to third. Jeff Babcock of Wayne, Ohio, who claimed Eldora's ALMS-sanctioned Johnny Appleseed Classic in May, finished fourth in Sunday’s race with Brian Ruhlman of Clarklake, Mich., rounding out the top five.

When the green flag dropped, it was Ruhlman darting into the lead with Robinson and Chris Keller in pursuit, while Miller was charging from his seventh starting spot. At the end of two circuits, Miller moved into third behind Ruhlman and Robinson.

It became clear sailing for Miller at that point, while Ruhlman and Robinson began their own battle before Henry’s rise soon brought him into the mix.

Henry appeared to be the fastest car on the track, but a lack of any further caution periods prevented him from getting close enough to challenge Miller for the lead.