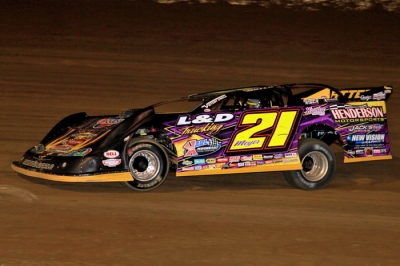 Billy Moyer heads for a $15,000 victory at Portsmouth. (rdwphotos.smugmug.com)

Racing for the first time in several years at Portsmouth’s 3/8-mile oval, Moyer held off multiple challenges from Owens to lead all 50 laps of the event, which served as the second leg of a three-race Labor Day weekend for the series. | Slideshow | Video

“There’s just certain places that fall right into your liking or your driving style,“ said Moyer, who claimed his 18th career Lucas Oil Series victory. “I like this track; it’s a big corner track and I’ve always favored big-corner tracks. We did very little to the car all night long and it worked good without having to change anything on it.”

Grabbing the lead from the pole, the 55-year-old Moyer received pressure from fourth-starting Owens for several laps through a string of cautions early in the race. Attempting to run the middle lane around the track, Moyer had to fend off multiple low-side challenges from Owens before moving his line lower on the track and pulling away to the victory.

“When you’re out there racing, it looks like it’s greasy down there,” Moyer said of the track’s faster lower groove that came in throughout the 50-lap main event. “But that grease went away, and if you put you’re left side in it, it was definitely a little faster.

“For a lap or two there, I was running too high. I seen (Owens) underneath me. After that restart, I tried it once and you could definitely tell it stuck better down there, so I just kinda stayed there the rest of the race.”

After performing under his Hall-of-Fame standards for much of the season, the victory gives Moyer a boost of momentum heading into the late stages of the season.

“We’ve been working our butt off on things on this car,” said Moyer, who earned his sixth overall victory on the year. “We made a lot of changes trying to build a new chassis for next year, and we’ve not been running like we wanted to. We’re close; I could tell the direction we’re working, and we’re getting better and better. We just haven’t had the finish to show it.”

Owens, who claimed his seventh Lucas Oil Series victory of the season in Friday’s weekend opener at Attica (Ohio) Raceway Park, came up short of the victory, but he bolstered his points lead over sixth-finishing Steve Francis of Ashland, Ky., for the second straight night.

“The bottom lane was the best. When he was able to get that other half car-length down, that was basically enough to seal the deal,” Owens said. "The track was hammer-down enough around the bottem that it’d took a pretty big mess up for us to get around him. He got away from us there at the end, but it was a good second place run.”

Notes: Moyer’s Victory Circle Chassis has a Clements Automotive Engine and sponsorship from Henderson Motorsports, L&D Trucking, Cooley Transport, Karl Chevrolet. ... The race was slowed by six cautions and took just over 30 minutes to complete. ... Mike Marlar spun while racing for third on lap 31. ... Defending race winner Jackie Boggs retired after 11 laps. ... Fourteen cars completed all 50 laps. ... Series regular Don O'Neal was sidelined from action once again Saturday due to back injuries suffered in an Aug. 22 rollover accident at Volunteer Speedway. ... Lucas Oil competitors made their first appearance of the season at Portsmouth after being rained out twice on Independence Day weekend. ... Rain was once again a threat on Saturday but the track hustled to complete the program before weather moved in. ... The series returns to PRP Oct. 17-19 for the 33rd annual Dirt Track World Championship. ... Lucas Oil competitors wrap up their three-race holiday weekend on Sunday with the 45th annual Hillbilly 100 at I-77 Raceway Park in Ripley, W.Va.