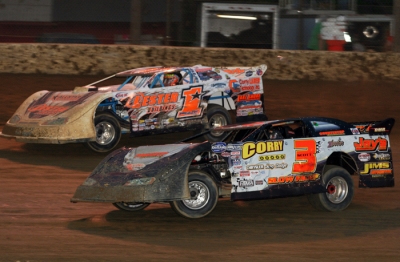 BUSTI, N.Y. (May 24) — Pennsylvania drivers David Scott of Garland and Matt Lux of Franklin earned $5,000 apiece at Stateline Speedway for unsanctioned victories in the Leonard Briggs and Bill Freiwald Memorial twin features tagged as the "Double Nickels." Scott outdueled Chub Frank of Bear Lake, Pa., in the opener while Lux fought off Frank late in the second feature. | Slideshow

Frank started on the pole of the Leonard Briggs Memorial, but Randy Lobb took the early lead over Frank and Scott. Frank dispatched of Lobb in the early laps and Scott moved up to second on the fifth lap and began his pursuit of Frank. After several cautions slowed the action before the 30-lapper's midpoint, Scott resumed his chase and pulled alongside Frank on the 20th lap. Scott nosed Frank at the line on laps 21-22, and when Frank slipped in turn two on lap 23, Scott scooted ahead. Dave Tackett tagged the frontstretch wall in front of the leader in the closing laps, but Scott survived and took the checkered flag over Frank, Boom Briggs, Lux and Lobb.

In the Bill Freiwald Memorial, Lux and Briggs started on the front row and Lux took command early with Jeremy Miller, Briggs, Richard Gardner and Frank giving chase. Among the early cautions was for Tackett's spin that sent Scott into the turn-one wall, and Lux remained in control while Frank worked his way to the front. Frank took third from Briggs on the 11th lap, then moved up to second just before the crossed flags. Several more cautions slowed the remainder of the event and Frank didn't mount his most serious charge until the final moments. He fell a car length short at the finish while Chris Hackett, Miller and Briggs rounded out the top five.

Notes: The night's racing was sponsored by American Racer Tires. ... Chad Valone of Warren, Pa., held on to his Super Late Model King of the Hill Challenge title defeating Darrell Bossard in the five-lap match race. ... Valone also stepped in to replace David Scott in a scheduled match race between the Double Nickel winners (Scott's car suffered damage in the second feature). Valone outran Matt Lux to earn $500 from Coors. ... The next Super Late Model special at Stateline is an Independent Racing Series visit scheduled for July 19 paying $5,000 to the winner.