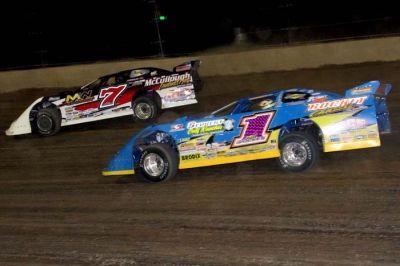 ROSSBURG, Ohio (May 25) — Josh Richards of Shinnston, W.Va., overtook Matt Miller just past the midpoint of the 39th annual Johnny Appleseed Classic at Eldora Speedway and went on to his first victory on the Sunoco American Late Model Series. Richards earned $2,000 for the victory on a Sunday when 56 Late Models packed the pits. | Slideshow

“It wasn’t a big race, but any win at Eldora is special,” said the 20-year-old Richards. “I love going to Eldora — I have ever since I ran my first race there. It seems like we’ve always been fast there and we’ve been close to winning so many times, but we just couldn’t quite get it done."

Miller, of Whitehouse, Ohio, jumped into the early lead and appeared to have things under control in gunning to follow up his ALMS victory the previous at Oakshade Raceway in Wauseon, Ohio. But Richards was quickly up to second and when the frontrunners headed into lapped traffic on lap 15, Richards turned up the heat and took the lead exiting turn two. From then on, it was a battle for second as Miller faced challenges from former sprint car pilot Rocky Hodges, Terry Casey and Jeep Van Wormer.

A lap-23 caution for debris quelled the action and set up a two-lap shootout, but that shootout was delayed when on the ensuing start, fast qualifier Doug Drown spun wildly down the backchute and got banged around to bring out a yellow and then red flag. He wasn't injured.

When the race resumed, Richards was unbeatable out front as he crossed the finish line ahead of Miller, Lanigan, Van Wormer and James. The 17th-starting Lanigan was dropped to fifth in the official rundown because he (as well as Casey) jumped a previous restart.

Notes: The winner's Rocket Chassis has a Cornett engine and sponsorship from Seubert Calf Ranches, Petroff Towing and Ace Metal Works. ... Audie McWilliams slowed to bring out a lap-four caution. ... The Johnny Appleseed, traditionally a fall event, now serves as a de facto tuneup for the June 6-7 Dream, a 100-lapper paying $100,000 to the winner. ... ALMS regulars head to Indiana for May 30-31 action at Gas City I-69 Speedway on Friday and Kamp Motor Speedway in Boswell on Saturday.