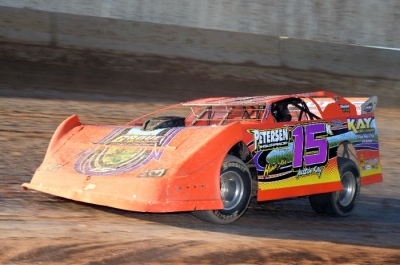 Justin Kay is having the kind of season that, until now, he could only dream about. After recording just three victories in his first six years of Late Model competition, Kay has exploded this season with 19 victories through Aug. 18, including a stretch of eight straight victories.

“I don’t really know how to explain this year for me,” said Kay, the 24-year-old farmer from Wheatland, Iowa. “I dreamed about winning a bunch of races, but I never thought we’d ever win like this.”

Kay has dominated action at his local tracks this season with 11 wins in weekly IMCA Late Model action at Davenport (Iowa) Speedway and Jackson County Speedway in Maquoketa, Iowa.

The success at the weekly level has put Kay in position to claim a trio of titles as the IMCA points season wraps up this upcoming weekend. With a 43-point lead at Davenport and a 30-point advantage at Jackson County, Kay needs only to start this weekend’s main events to claim the Late Model championships at each track, and in doing so, also claim the IMCA Late Model national points championship.

“Really, going into this year, I just wanted to try for a track championship, so I never dreamed we’d be sitting where we are now,” said Kay, who took the IMCA national points lead and opened a comfortable gap by winning Aug. 17 at Jackson County and sweeping double features Aug. 18 at Dubuque (Iowa) Speedway. “We’ve still got a weekend left, but as long as nothing crazy happens we should get both track championships and the national championship. It’s been an awesome year, that’s for sure.”

Kay’s success hasn’t been limited to weekly racing. Over a nine-day stretch in early July, Kay not only broke through for his first victory on the IMCA-sanctioned Deery Brothers Summer Series at Independence (Iowa) Motor Speedway, he then followed it with two more series victories at Davenport and West Liberty (Iowa) Raceway.

“That was a big one there,” Kay said of the Corn Belt Clash victory. “To get our first (Super Late Model) win, it really just capped it all off.”

Kay’s breakthrough season has come after a switch to a Barry Wright Race Car during the offseason. He performed well while still adjusting to the new car early in the season, but the majority of his success has come after getting the car fine-tuned early in the summer.

“I thought we’d run pretty good this year with the new car and everything,” Kay said. “But when we hit on something and got the car right there in July, it just turned everything around. We were doing OK before that, but since then, it’s just been unbelievable.”

While Kay’s previous years of Late Model racing may not have foretold anything close to the season he’s had this year, an early season trip west for Arizona’s traditional January Super Late Model events certainly hinted at a major improvement in his program.

Debuting his new Barry Wright car, Kay claimed a runner-up finish in the opener of Arizona’s popular winter Late Model action during the first round of Central Arizona Raceway’s Wild West Shootout doubleheader, then backed it up with a fifth-place finish the following night.

Kay continued to run well the following week at Tucson International Raceway, making all six feature lineups during the inaugural Winter Extreme miniseries with a pair of top-five finishes.

Kay credits the successful early season trip for much his later success closer to home.

“I know that going to Arizona this year really helped us out,” Kay said. “I learn a lot from racing with those guys just by watching them drive and racing with them. Going out there this year was really big because we switched to the new chassis. It really gave us a head start for when we came back and started racing around here.”

With a busy farming schedule in the fall, Kay doesn’t plan to race very often once the IMCA points chase wraps up. But he plans to once again get an early start on the season in 2014 with another trip to Arizona. With the way he’s performed in recent months, Kay is aiming for an even better showing out West this time around.

While his breakout performance has Kay already looking ahead to more success next year, every now and then Kay enjoys taking some time to enjoy and reflect on his success this season. He periodically catches himself doing just that when he looks at the calendar in his race shop where he keeps track of all of his race results.

“I look at that calendar and the last couple weeks of June all the way through July and August, there’s so many firsts and seconds,” Kay said. “I just look at it and think 'Wow, this is crazy.’ And it really is; I never dreamed everything could click like this all at once.”

• At Twin City Raceway in Kenai, Alaska, Bob Reinhart ended the perfect season of Shawn Hutchings by outrunning him Aug. 18.

• Continuing his onslaught on the Missouri-based United Late Model Association, Jason Russell of Henley, Mo., won home-state events at Callaway Raceway and Lucas Oil Speedway for his record-setting 12th and 13th victories of the season.

• At Oakshade Raceway on Aug. 17, Dona Marcoullier of Houghton Lake, Mich., won one of two features in wrapping up the Late Model title at the Wauseon, Ohio, oval.

• In the Aug. 16 reopening of Thunderhill Raceway under new ownership, Brad Skinner of Spring Hill, Tenn., raced to a Super Late Model victory in Summertown, Tenn.

• At Independence (Iowa) Motor Speedway on Aug. 17, Luke Pestka of Robins, Iowa, led all 25 laps for his first victory of the season.

• At Georgetown (Del.) Speedway, Andy Haus of Hamburg, Pa., made his four-hour drive pay off with an Aug. 16 victory, his first at the Delaware oval.

UMP DIRTcar (Super Late Models): Bobby Pierce of Oakwood, Ill., continues to inch closer to leader Brandon Sheppard of New Berlin, Ill., with the gap down to 174 points through Aug. 11 events. Rusty Schlenk of Weston, Ohio, is another 46 points back in third.

UMP DIRTcar (Crate Late Models): Through Aug. 11 events, Aaron Heck of Mount Vernon, Ill., clings to a one-point advantage over Nick Lyons of Centralia, Ill., with Jeff Walston of Paducah, Ky., 50 points out of the lead in third.

IMCA: Todd Cooney of Des Moines, Iowa, leads through Aug. 11 events, but Justin Kay of Wheatland, Iowa, has closed the gap to just 10 points. Tyler Bruening of Decorah, Iowa, is third, 19 points out of the lead.

WDLMA: Tim Buhler leads Justin Hirt by 10 points as of Aug. 17, with Russ Scheffler another eight points back.

AMRA: Defending champion Chris Garnes Evans, W.Va., has moved out front by four points over Ronnie Mayle of Chesterhill, Ohio, with Andy Bond of Coolville, Ohio, another 15 points behind.

ULMA: Defending champion Jason Russell (1,790) of Henley, Mo., padded his lead on the Missouri-based Limited Late Model series with his 12th and 13th victories over the weekend. He leads Vance Wilson (1,712) and rookie contender Payton Looney (1,704).

Macon (Ill.) Speedway (Aug. 24): The Shrine 50 pays $1,500-to-win for Late Models and raises money for Shriner Hospitals. The Shriners will also give away a dozen bicycles to children in memory of Robert Weaver.