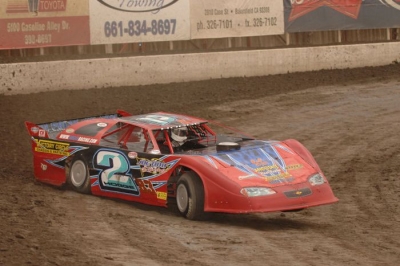 Notes: Hogge's Victory Circle Chassis is sponsored Midstate Fleet Repair. ... Hogge's seventh career series victory breaks a tie with Mike Johnson and Steve Drake for the most career victories on the tour. ... Chet Buckley lost a driveshaft in the feature and ended up 20th. ... Jason Selvidge was the race's hard charger. ... Fast qualifier A.J. Kirkpatrick scuffled with Ron Meyer in the feature. ... Larry Childress scratched from the feature lineup. ... Up next for the Western Allstars is the first visit to American Valley Speedway in Quincy, Calif., for a May 31 event. The originally scheduled May 30 race at Silver Dollar Speedway in Chico has been pushed back to Aug. 9.