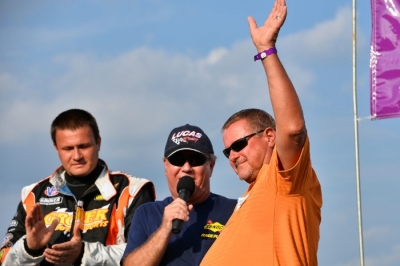 It was day of thanks and counting blessings among eight members of the Class of 2013 for the National Dirt Late Model Hall of Fame, inducted Saturday evening before the 31st annual North-South 100 at Florence Speedway. | Hall of Fame slideshow

Willy Kraft of Lakefield, Minn., the first Minnesota driver inducted and three-time Gopher State 50 winner, thanked everyone for helping him reach the sport’s heights as he traveled the highways and byways between dirt tracks.

“I could stop in any state and work on my race car if I wanted to,” Kraft said upon his induction. “I thank you all.”

A driver whose career spanned six decades, the late Iowan reached NASCAR’s highest levels at Daytona (Fla.) International Speedway, but he made his name on Iowa dirt tracks with more than 400 victories and more than 20 track titles.

Dake was represented by multitrack Iowa promoter Keith Simmons of dirt tracks in Farley, Dubuque and West Liberty, along with track-chaser Randy Lewis, who has traveled to 1,883 tracks in 65 countries and counts Dake as his all-time favorite driver.

The prolific Dake was “a great mentor to guys like me when I first came along and starter,” said Simmons, who went on to an engine-building career in the NASCAR ranks before returning to Iowa’s dirt tracks.

Simmons remembers Dake supporting his family and sending children to college with a race car “that he created with his own hands,” and Simmons brought a replica of one of Dake’s No. 8 cars sponsored by Grant Williams Fordtown, a 1966 Ford Fairlane, taking a lap around Florence at the conclusion of the ceremony.

The quick-witted Missouri native who went from motocross racing to dirt cars rose to fame as the GRT Race Cars house car driver became one of the most successful dirt racers in racing-rich Arkansas.

National Dirt Late Model Hall of Fame director Bill Holder introduced Frye, telling him he always reminded him of film star Harrison Ford. To which Frye told Holder: “I’ve probably taken more hits on the racetrack than Harrison has in the many movies he’s been in.”

Now semi-retired, Frye piled up more than 300 victories, including 10 on the Hav-A-Tampa Dirt Racing Series. He also captured Dixie Shootout, Topless 100 and Hillbilly 100 victories and ranks second on the all-time list of MARS victories. His first major victory came in the first of five Muskogee Octoberfest triumph driving a car he’d built himself.

In closing, Frye thanked everyone, saying he’d “starting out with nothing” — and still had most of it.

A far-flung traveler from the upper Midwest, Kraft’s blue and yellow No. 83 cars were a familiar site to fans who chased big-time Dirt Late Model races. He racked up more than 350 victories on a variety of tours and won the championship on USAC’s final Late Model series.

Kraft, who drove for car owners including Joe Minga, Lou Fegers and Bob Schryock, moved to Texas to build modifieds upon his retirement from racing in the Late Model division.

He thanked the fans he met over his career, including those during a single season where he competed in races in 34 of 50 states.

“What I miss mainly is meeting all the nice people throughout the whole country,” Kraft said, gesturing toward the Florence grandstands. “That’s the biggest thing, you fans.”

Fans have seen the driver known as the Modern Day Cowboy in one of two outfits. A driver’s suit and ... what he wore for his emotional induction by long-time friend and former Brownstown (Ind.) Speedway announcer James Essex.

“He came dressed, didn’t he folks?” Essex asked the crowd. “He's got the boots and the hat on.”

The only inductee competing in the weekend action, Gill made sure to thank car owners, mechanics, crew members and supporters during his career that stretched back to 1981 with more than 300 victories. He listed Travis Kern, brothers Duke and Jeff Mounce, Terry Eaglin, Gary Dewitt, C.J. Rayburn, Keith and Tader Masters among those who helped him to 54 victories at Brownstown, second most on the all-time list behind Jim Curry.

(Gill, however, questioned Essex and his statistics, claiming he had a 55th victory that was unrecorded. He insistent his first victory on Brownstown quarter-mile’s came on a bicycle when he was 12 years old. “They missed that one along that way,” he cracked.).

Gill counted Curry, Don Hobbs, Ray Godsey, Kenny Simpson, Ira Bastin and other drivers among his heroes, and was thrilled to be racing among them as their careers came to a close.

“It’s was an honor to get to race with 'em, and when I was finally able to outrun 'em, I though, 'Man, I’ve really done something,' ” said Gill, who Essex tabbed Brownstown’s favorite son.

Not that he didn’t have some differences with those and others drivers during his career, including the first time Gill won the Kenny Simpson Memorial, nipping Curry at the checkers. “Jim still thinks he won that one,” Gill said.

More than once, Gill’s voice cracked as he talked about the friends and relationships he’s made in racing that will far outlast any money he ever made.

“It’s the pinnacle of my career to be here today,” Gill said, “and a privilege.”

The speedy Bluegrass State driver scored more than 250 career victories, and he’s still part of the sport as crew chief for his son Eddie Carrier Jr., a current driver on the Lucas Oil Late Model Dirt Series. The younger Carrier joined his father on the stage for the inductions along with Essex.

Eddie Jr. remembers his father toiling on his race car in a dirt-floor garage after long days working a full-time job, and realizes he was among modern Dirt Late Model racing’s pioneers.

“They paved the road for guys like us to do what we do,” the younger Carrier said of his father and other Hall of Famers.

The elder Carrier credits Russ Petro with helping him early in his career. After watching Petro flat-foot it around the track, Carrier thought: “I can do that, too.” It took him a little practice, but soon he was among the fastest runners, too.

He told of a tough stretch in his career when he built his own car and went on a winning streak of five or six in a row to revive his racing program. “I thought I was rich,” he said. He counts among his highlights a 100-lap victory at Ponderosa Speedway in Junction City, Ky., over a field that included Hall of Fame drivers Jack Boggs and Scott Bloomquist.

Carrier talked about his rivalries with Boggs and scrapes with other drivers, including one unnamed racer who put him in the wall at the 1987 World 100 — “He’s in the Hall of Fame,” was the only clue Carrier provided.

“I didn’t make many friends back then,” he said. “I’d park by myself.”

Garrison was humbled to be listed among the sport’s greats at the helm of a 20-employee company that builds 300 cars a year and has sent more than 4,200 Dirt Late Models out of the shop.

“Thirty years (ago), if you told me I was going to be up here, I’d have said you were probably dreaming,” Garrison said upon his induction.

GRT has been Manufacturer of the Year with several racing organizations, and Garrison thanked his wife, family and employees for sticking by him through years thick and thin.

“We’ve got a few more good years in us,” Garrison said, “so we’re going to be back.”

Former team owner Brownie Brown was among those representing the Augusta, Ga., man who was among the sport's most prolific sponsors for 20 years, supporting series champions including Jeff Smith, Ricky Weeks, Casey Roberts and Ronnie Johnson.

Greeting him at the track was a pleasure. “Mr. Jack always had a smile on his face with a handshake,” Brown said.

Starrette, who died three years ago in a work-related fall, was well-known for his generosity to teams with big-time support, or sometimes just some extra money to make it to the next race.

The Ohioan’s voice has boomed over PA systems and at drivers’ meeting at tracks across the country during a career of more than 30 years as an announcer and track official, with stints of 10 seasons or more on both the Short Track Auto Racing Stars and World of Outlaws Late Model Series.

His racing career began as a pit steward at Lakesville Speedway in 1980, but that lasted just two weeks when it was discovered he worked at a local radio station, and he was quickly whisked to the announcer’s booth, where his dad once worked. Emrick went on to announce at many Ohio tracks, including historic Eldora Speedway, where track founder Earl Baltes encouraged him to “look me up because you’re going on the mic” if he ever visited. (Baltes also had an unexplained nickname for Emrick: Spanky).

Emrick's background is in sprint cars, so he lists his favorite track as Bloomington (Ind.) Speedway, but announcing Late Model racing's Dream and World 100 events at Eldora were among his most memorable tasks. No matter what kind of cars, his heart is in short-track racing.

“Without our dirt tracks, we wouldn’t have this sport,” he said, calling it the backbone of NASCAR and Indy racing’s big leagues. “It all starts here.”

Upon hearing about his induction, Emrick said he had two thoughts. First, he was honored that his peers respected his work over 33 years. But secondly (and jokingly), he wondered if “it means people are saying you’re getting too damned old and it’s time to go out to pasture.”

Former driver Wally Heminger of Fremont, Ohio, received a Lifetime Achievement Award. The two-time Fremont Speedway champion and winner of the Johnny Appleseed at Mansfield (Ohio) Speedway brought his red, white and blue Ford Mustang for display. ... Steve Gigeous of Sports Plus Video, who has shot more than a million laps of racing over 25 years, also received a special award for his work. DirtonDirt.com co-founder Michael Rigsby introduced Gigeous as “the face, the camera and really the steady hand behind Late Model video.” ... Hometown driver Darrell Lanigan was also honored with his 2012 RPM Driver of the Year award. ... Don O’Neal of Martinsville, Ind., received the Sportsman of the Year award.